Call for ‘fair play’ for poor as World Cup kicks off

With the World Cup kicking off on Thursday (12 June) representatives of the Catholic Church in Germany and Brazil are to give the Brazilian government “Ten Rules for fair play and justice for all”.

The action for the 2014 World Cup by the Catholic Church in Germany (through its body ADVENIAT and other supporters), the National Conference of bishops of Brazil (CNBB) and the Conference of Religious of Brazil (CRB ) is called “Steilpass”.

In football jargon that means to score goals.

Fides Agency has reported that the 10 rules include: the need to create decent work for all; access to a complete public education; ensure democratic justice; rural and agrarian reforms in an equitable manner; democratic media; promote and protect young people from violence; preserve the cultural diversity of the peoples; fight corruption and ensure transparency; and undertake initiatives to promote social commitment of citizens; health care for all.

Through “Steilpass” they want to respond to the social problems expressed in several demonstrations carried out recently in Brazil.

One such demonstration was held in support of the 237 families of Mauá community who were due to be evicted on the eve the World Cup.

However, with the support of charities such as Cafod (Trócaire’s sister agency in the UK) they were able to pressurise the municipal government to purchase the building which has been their home for seven years.

Community leader, Nete Araujo, said: “Sometimes I have felt quite desperate, and then I stop and think I am not alone, and that is good. I want to thank all of you for this victory, for being together with us.”

CAFOD director Chris Bain commented, “We must continue to stand by them, and we must carry on that fight on behalf of all the hundreds of thousands of other families in São Paulo in need of decent and secure housing.” 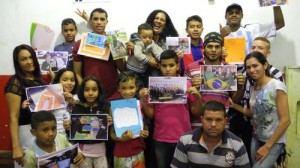 While there have been many protests about how the poor and workers have been treated in the construction phase of the World Cup, there has also been a focus on the “obscene” deals around the competition which benefit big business rather than the people of Brazil.

Brazil will lose up to £312 million in revenue to World Cup sponsors including McDonalds, Budweiser and Johnson & Johnson, according to the campaign by InspirAction, Christian Aid’s Spanish organisation.

“The price of these tax breaks for corporate giants will be paid by people living in poverty in Brazil and that is obscene,” said Isabel Ortigosa of InspirAction.

“Brazil is already one of the most unequal countries in the world. The millions that FIFA demands for its sponsors should be used for the benefit of Brazil’s many poor communities, not to enrich the already powerful.”

InspirAction has launched a petition calling on FIFA President, Sepp Blatter, to give tax breaks for the World Cup sponsors the “red card – and never impose these rules on World Cup host countries in the future.”

The Archdiocese of Rio de Janeiro, UNAIDS and the city’s state university joined their voices on 23 May to promote equality and the elimination of stigma and discrimination.

One campaign – Zero Discrimination – aims to reduce the transmission of HIV/AIDS and eliminate stigma and discrimination.

Another, Protect the Goal, uses the popularity of sport to unite the world to achieve the goal of an AIDS-free generation.

The Archbishop of Rio, Cardinal Orani Tempesta, said at the event, “The world we desire is one in which people live a dignified life and are free to live in a way where they do not feel threatened because of the way they think, their religion, their ideas or their illnesses.”

He added, “Knowledge, fraternity and love of one’s neighbour makes all the difference.”

Speaking at the event, Msgr Robert Vitillo, Caritas Internationalis’ special advisor on HIV and AIDS, highlighted the importance of sport citing St John Paul II, who said that playing sports “can encourage young people to develop important values such as loyalty, perseverance, friendship, sharing and solidarity” and represent “an opportunity for meeting and dialogue, over and above every barrier of language, race or culture.”

The event was held in advance of Brazil playing host to not just the World Cup but also the 2016 Olympics.