Call for dioceses to publish their audited accounts online 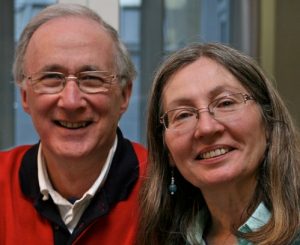 Colm Holmes and Soline Humbert of We Are Church Ireland.

More Irish dioceses need to publish their audited accounts online according to lay reform group, We Are Church Ireland.

The group recently carried out an analysis of the financial transparency of the 26 dioceses in Ireland based on a methodology used by Voice of the Faithful (VOTF) in the USA.

The analysis found that 62 per cent of Irish dioceses have no financial information on their websites.

The results for the Irish Church compare unfavourably with dioceses in the USA, where VOTF’s survey revealed that 34 per cent of the US Church’s 177 dioceses did not include any financial information about their diocese on their websites.

Colm Holmes of We Are Church Ireland (WACI) told CatholicIreland.net that VOTF’s analysis is based on ten questions and the same questions were used to analyse Irish dioceses.

The two main findings are:

In Ireland, the drive for financial reporting and transparency is a consequence of the Charities Act (2009) as well as the UK Charities Acts 2008 and 2013 for those dioceses located in Northern Ireland.

“There are numerous financial statements in the Companies Office covering many dioceses, parishes and trusts. But in this day and age the website is the shop window for all organisations and that is where this information should be available in each diocese,” Colm Holmes stated.

“But with all monies for the Church raised by donations from all the people of God over many centuries, surely in the 21st century our dioceses should be publishing annual financial reports?” he commented.

He congratulated the Diocese of Ossory, which topped the survey for transparency, for making its audited 2016 financial statement available on the diocesan website.

“But it is disappointing to see Armagh mid table, though we found a note on their website saying the proper publication of financial statements …. is a priority,” he explained, and added that it was “also disappointing is to see a large diocese like Meath at the bottom of the table.”

Colm Holmes said it was “of concern” that only 5 of the 26 dioceses in Ireland publish audited accounts on their websites. A further five published some financial data.

“That still leaves 16 of our dioceses who provide no financial data on their websites. Is this back to the need-to-know thinking where the laity are routinely excluded from such information? The level of trust in our Church institutions has declined dramatically in recent years. With the decline in male-only celibate vocations, the laity are being asked to take on many more roles in supporting our Church. Surely the publication of audited financial statements is a basic requirement for rebuilding trust?”

Speaking to CatholicIreland.net, Colm Holmes said that as far as he was aware this is the first such survey of Irish dioceses.

“My concern is that the information is not on websites and that is where people look for it. You can go digging in Companies’ Offices and you can dig through the Charities Regulator’s site and you can find snippets here and snippets there. With parish reports, bishops’ reports and various reports of trusts, it gets very complex. I think it is important to produce understandable accounts that are audited for each of the dioceses.

“It is about transparency and that is what Pope Francis is all about – so we can see what our Church is doing with our money.”

“I am not for a moment suggesting that the money is being badly dealt with – absolutely not. But it should be in the public domain and available to all, so that Joe and Josephine public can see what is happening with the money and what it is used for,” he said.