Home > Featured > Call to continue to work for NI peace

Call to continue to work for NI peace 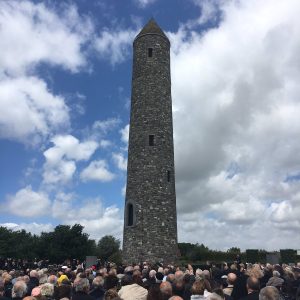 They also asked that representatives “continue through the devolved Assembly to provide leadership for the good of all the people of Northern Ireland, irrespective of political or religious background, in the days, months and years ahead.”

The church leaders were attending centenary commemorations for the Battle of Messines in Belgium, and included Archbishop Richard Clarke (Church of Ireland), Archbishop Eamon Martin (Catholic Church), the Revd Bill Mullally (President of the Methodist Church in Ireland), and the Very Revd Dr Frank Sellar (former Moderator of the Presbyterian Church in Ireland).

The church leaders were among many people marking “the tragedy and futility of war and the searing pain and loss which Irish people from all walks of life encountered one hundred years ago at the Battle of Messines” during the First World War.

The battle was the first in which soldiers from both traditions in Ireland, unionist and nationalist, fought side by side. Now, one hundred years on, the church leaders said that as the talks among the political parties in Northern Ireland have been postponed until after the UK General Election (8 June 2017), it is appropriate to remember the words of the Peace Pledge at the Island of Ireland Peace Park at Messines.

It states: “We appeal to all people in Ireland to help build a peaceful and tolerant society. Let us remember the solidarity and trust that developed between Protestant and Catholic soldiers when they served together in these trenches … we affirm that a fitting tribute to the principles for which men and women from the Island of Ireland died in both World Wars would be permanent peace.” 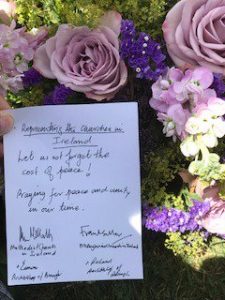 The church leaders were present at what was a joint UK–Irish ceremony involving Prince William, The Duke of Cambridge and Taoiseach Enda Kenny. Also present were Princess Astrid of Belgium and Lord Dunlop, Parliamentary Under-Secretary of State at the Northern Ireland Office, as well as some Northern Ireland politicians.

The Island of Ireland Peace Park was officially opened on 11 November 1998 by the President of Ireland Mary McAleese in the presence of HM Queen Elizabeth II and King Albert II of Belgium.

The memorial site is also known as the “Irish Peace Park” or the “Irish Peace Tower”, and is dedicated to the soldiers of Ireland, of all political and religious beliefs, who died, were wounded or went missing in the Great War of 1914 to 1918. Irish men and women served with the armies of Australia, Britain, Canada, New Zealand, South Africa and the United States.