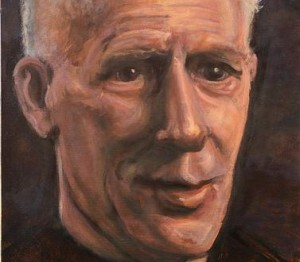 To mark the bicentenary of the restoration of the Society of Jesus by Pope Pius VII in 1814, the Jesuits in Britain have launched an online calendar for 2014.

The calendar comprises 12 portraits of 12 Jesuits who have been active since the Restoration.

It also includes brief descriptions in several languages of the lives and ministries of the 12 Jesuits.

The Commission for the portraits was given to a young artist named Ellen Riley, a past pupil of the Jesuit Stonyhurst College in England.

She studied art in Paris and returned to Stonyhurst as an ‘Artist in Residence’.

With her husband, Cédric Charleuf, who is also an artist, she began work on the commission but, sadly, just as she had crystallised the idea of the 12 portraits and had begun the first portrait – that of Pedro Arrupe (February) – she became very ill with the recurrence of a cancer and died aged only 24.

Her husband Cédric decided to complete the commission, immersing himself in her style and texture. The calendar is dedicated to her.

The 12 Jesuits who illustrate the calendar are:

Founded in 1540 by St Ignatius Loyola and his first companions, the Jesuits were to become an important religious order, with ministries and missions in many parts of the world.

As they developed many new works and gained in influence, the Jesuits found themselves more and more in conflict with those who held power.

These tensions reached a climax in July 1773 when Pope Clement XI, under pressure from the crowns of Spain, Portugal and France, suppressed the Jesuits and ordered them to leave all Catholic countries.

It was not until 1814 that the restoration of the Jesuits could be completed, when on 7 August Pope Pius VII attended the Jesuit Church of the Gesù in Rome, celebrated mass at the altar of St Ignatius with 18 cardinals and many other bishops and priests, and pronounced the Jesuits restored everywhere.

Since 1814, the Jesuits have once again established ministries and missions throughout the world, and this calendar is to acknowledge and celebrate the work that has been done by so many over the past 200 years.

More information on the calendar can be seen here: http://calendar2014.jesuit.org.uk/