By bough, branch or twig, you can mark Palm Sunday tomorrow, say ACP

Palm Sunday marks the anniversary of the day when Our Lord entered Jerusalem and was welcomed by crowds who honoured him by throwing palm leaves in his path. 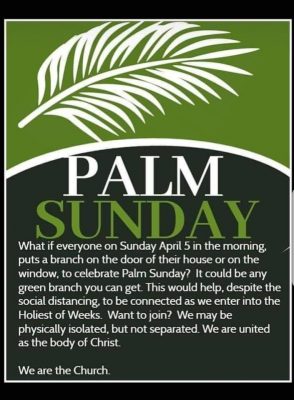 h as box elder, willow or spruce; in Rome, olive branches are usually used as an alternative. After Mass, sprigs of leaves that had been blessed, would be taken home and placed above doors and hearths as a reminder of this special week in the Christian calendar.

However, there will be no publicly celebrated Masses in Ireland tomorrow. People are instead being asked to put some time aside to pray at home, along with other family members if possible. The leaders of Ireland’s main churches, including the Catholic primate Archbishop Eamon Martin of Armagh are inviting the faithful to do this between 3 pm and 4 pm.

The Association of Catholic Priests of Ireland is suggesting that worshippers begin tomorrow by placing a green bough or branch on display on their front door or in their front windows.

“This is all about symbolism,” said Fr John Collins of the association’s leadership team. “We need to be inventive to celebrate Palm Sunday as best we can. The most important thing is for people to pray and to pray especially for those who are suffering because of COVID-19. There is a range of prayers available on the Dublin diocesan website and, indeed, most diocesan websites.”

An ACP posting promoting the creation of personal Palm Sunday displays, says: “it could be any green branch you can get. This would help, despite the social distancing, to be connected as we enter into the holiest of weeks.

“Want to join? We may be physically isolated, but not separated. We are united as the body of Christ. We are the Church.”