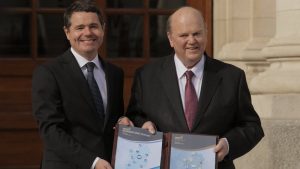 Catholic development agency, Trócaire, has expressed disappointment that Budget 2017 represents a drop in terms of the percentage of Gross National Income (GNI) being spent on assisting the world’s most vulnerable.

However, the agency highlighted that Budget 2017 nevertheless would result in a further percentage drop in ODA.

Trócaire Executive Director, Éamonn Meehan, said the budget once again reduced the percentage of national income being set aside for helping the world’s most vulnerable people.

“On a percentage basis, this budget is likely to leave us at the same level we were at 17 years ago,” he criticised.

“Ireland has an international commitment to spend 0.7 percent of national income on helping the world’s poorest people, yet this budget will bring us further from this commitment,” Mr Meehan stated.

According to the Government’s growth projections, this will leave overseas aid at approximately 0.3 percent of national income – just 30 cent for every €100 the Government spends.

Éamonn Meehan stressed that Irish Aid is recognised internationally for delivering “excellent overseas aid programmes”, and so it was “disappointing that the Government continues to break its promise to properly fund it.”

He called on the Government to publish a timetable to outline exactly how we are going to finally start meeting our international obligations.

Separately, the Peter McVerry Trust has welcomed the additional €28 million allocated by the Government to provide additional emergency homeless accommodation.

It was also welcomed by the Simon Community. National Spokesperson, Niamh Randall, warned, “We must not be reliant on short-term measures and temporary solutions. We know that moving to a secure home with support is the best way to support people to move out of homelessness.”

The Peter McVerry Trust also welcomed an additional €105 million towards the Housing Assistance Payment (HAP) scheme and the 15,000 tenancies it is seeking to deliver.

Peter McVerry Trust chief executive, Pat Doyle, said, “The new funding is recognition by the Government that we need to increase the availability of suitable emergency beds for those in need and to ensure that we respond to the rising numbers in homelessness.”

The Simon Community also welcomed the commitment to ensure that 3,000 people are moved on from emergency accommodation through both rapid builds and HAP in 2017.

ALONE, the charity that supports older people to age at home, welcomed the increase to the state pension announced in Budget 2017.

CEO of ALONE, Sean Moynihan, said in a statement, “While we welcome the €5 increase to the pension, we have been campaigning for an indexing of the pension to ensure that its value is safeguarded for older people. This would end the yearly calls for pension increases and give older people fair financial independence.”

ALONE’s pre-budget submission called for an increase in home help hours, as these have been cut by 1.28 million since 2010.

According to Sean Moynihan, “There has been no announcement from the Government yet on homecare packages. With our ageing demographic, supporting older people to age at home must be a priority for every government.”