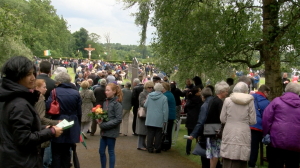 A special tribute was paid to Jastine Valdez by the leader of the Columban missionaries in Ireland at a ceremony at Dalgan Park last weekend.

The 24-year-old Filipina woman was brutally murdered by Mark Hennessy after he kidnapped her from near her home in Enniskerry, Co Wicklow on 19 May last.

Ms Valdez’s remains were repatriated back to the Philippines for her funeral there at the end of May.

In his homily at the annual blessing of graves of deceased members of the Missionary Society of St Columban, Fr Pat Raleigh, regional director, prayed for Ms Valdez’s parents, Terresita and Danilo Valdez, who he said, “must be inconsolable in their sorrow, as she was an only child”.

Recalling the Columbans’ long association with the Philippines, Fr Raleigh paid tribute to the outpouring of solidarity of so many people, including the Irish Filipino community who, he said, had responded with such generosity.

“It is so shameful that this horrific death took place here in Ireland of a young vibrant young woman out walking and with a very bright future ahead of her. We ask for forgiveness from the Filipino people,” Fr Raleigh said.

Elsewhere in his homily at the open-air Mass attended by over 400 people in the cemetery grounds of Dalgan Park, Fr Raleigh prayed for other young people who were brutally murdered recently, the two young teenagers who were drowned near Ennis, and others who have died tragically as a result of accidents including Michael Fogarty who died in a car crash on the M18 motorway and was a cousin of Columban missionaries, Frs Sean, Alo and Finian Connaughton.

“The Ireland of today is very different to the one in which I and many of us grew up,” Fr Raleigh acknowledged.

He said this was “very evident from the results of the recent Referendum to repeal the Eighth Amendment”.

“Irrespective of the result of the Referendum we should always have a deep respect for the unborn and for life itself,” he stressed and added that in spite of the apparent prosperity in the country there was a growing percentage of the population experiencing difficult times.

“Homelessness is an issue that needs urgent attention,” he warned.

However, on the positive side, the Columban leader said that Ireland has become a more diverse and multicultural society.

“People from other cultures have greatly added to the richness of who we are as a nation. Here in Ireland, which is indeed a locus for mission, we now have the opportunity to engage in a very real and meaningful way with these people representing various religious traditions.” 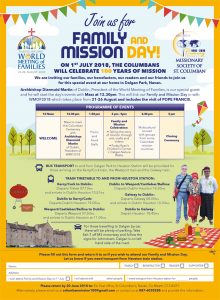 Noting that 2018 is “a very symbolic year” for the Missionary Society of St Columban as it celebrates 100 years of Columban Mission, Fr Raleigh said the Columbans owed “a huge debt of gratitude to the pioneering spirit of our Co-founders, Bishop Edward Galvin from Cork and Fr John Blowick from Mayo”.

“We thank them for their foresight and vision in founding a new Missionary Society, ‘The Maynooth Mission to China’. To initiate a new venture like this in the turbulent years between 1916-1918 demanded a huge leap of faith and trust in God’s Providence (something we may not fully appreciate today). It was right in the middle of the First World War and within six months of the Dublin Rising. Conditions for the Irish people were very difficult and hard as indeed they are today for many.”

He said that from the very beginning the generosity of people was extraordinary and that continues today.

As part of their Centenary celebrations, the Columban missionaries are hosting a ‘Family and Mission Day’ at Dalgan Park on 1st July 2018.

The day of celebration begins at 12.30pm with Mass celebrated by the president of the World Meetings of Families, Archbishop Diarmuid Martin.

This celebration of family and mission links the Columbans with the World Meeting of Families (WMOF2018) which takes place from 21-26 August 2018 and will see Pope Francis visit Ireland.

After Mass on 1st July in Dalgan Park, participants will be able to picnic in the wonderful grounds in Dalgan or purchase food from the food stalls in the grounds.

Between 2-5pm, visitors can learn about the story of Columban mission through exhibitions, arts, crafts and videos.

A dedicated ‘Pudsy Ryan’ Childrens’ Corner will host events to keep the youngest visitors interested, while ecology expert, Ger Clarke will be on hand to talk about the nature, flora and fauna of Dalgan Park’s 500 acres.

There will also be a multicultural concert with bands from some of the mission countries where the Columbans have served.

Explaining the decision to host the Family and Mission Day, spokesman for the Columbans, Fr Cyril Lovett said, “We don’t often have a chance to say ‘thank you’ on a grand scale. It is a celebration of our centenary – 100 years of mission – involving thousands of Columban women and men. We want to draw as many people as possible into our celebration but particularly our friends who have been so faithful in their support.”