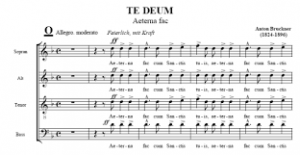 Last Friday night witnessed the final concert in the “Bruckner Music and Faith” series at Dublin’s National Concert Hall as part of the Main Season of concerts of the RTÉ National Symphony Orchestra (NSO).

The focus of this concert was Anton Bruckner’s Te Deum in C major, which is an early Christian hymn of praise. The soloists were Majella Cullagh (soprano), Anne Marie Gibbons (mezzo-soprano), Paul McNamara (Tenor) and Dietrich Henschel (baritone), with the RTÉ Philharmonic Choir (chorus master Mark Hindley) and the NSO, conducted by Hans Graf.

The Te Deum takes its name from the opening Latin words “Te Deum laudamus” (“Thee O God we praise”). Bruckner (1824–1896) completed this work in the early 1880s, and the hymn points ahead to the 20th century, with its ostinato technique as well as its sharply delineated sound groups and primeval rhythmic power. The work premiered in Vienna in 1885, and there were many more performances during Bruckner’s lifetime.

The setting of the Te Deum is in five sections, and we heard the choir in unison opening the first section in an impressive C major. The opening section, propelled by a powerful open-fifth pedal point by the organ, together with an open-fifths motif in the strings, highlights the ardent nature of Bruckner’s faith.

The work opens with the words “Te Deum laudamus, te Dominum confitemur” (“We praise you, God, we acknowledge you as Lord”). The second section was imploring and serene in nature and featured an expressive tenor solo and a solo violin. The third section was majestic, drawing on the full resources of the choir and orchestra. 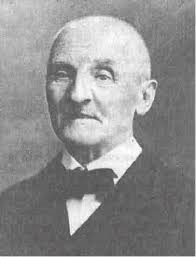 The fourth section, “salvum fac populum tuum, Domine” (“Make your people safe, Lord”) (moderato) in F minor, began as a repeat of the second section, with the ladies’ voices accompanying tenor Paul McNamara, and the “per singulos dies” sub-section recalling the energy and fervour of the opening sequence. The last section, “In Te, Domine, speravi” (“In you, Lord, have I trusted”) in C major, was initiated by all four soloists and culminated in a joyous fugue, with a subsequent impassioned chorale. The work concluded with a majestic climax.

The Te Deum is also known as the Ambrosian Hymn (because of its association with St Ambrose), or A Song of the Church. It is a traditional hymn of joy and thanksgiving.

Anton Bruckner was strongly motivated by his religious convictions, and Hans Redlich (one of Bruckner’s biographers) stated that Bruckner may have been “the only great composer of his century whose entire musical output is determined by his religious faith.”

Like Bach, Bruckner’s music served to praise and glorify God. Bruckner often spoke of God as being the source of his creativity and acknowledged the importance of divine inspiration in his work.

The concert also included three other works – Humiliated and Insulted  by Gerald Barry (which was a world premiere that was co-commissioned by RTÉ and the Royal Scottish National Orchestra), together with Rückert-Lieder  by Gustav Mahler and Metamorphosen by Richard Strauss.

This concert truly featured music that was a feast for the soul and the senses.