Yesterday (Monday) RTE Radio 1 broadcast a special service to commemorate the babies, toddlers and children who died in the 1916 Easter Rising.

The ecumenical service was held at the Church of the Immaculate Heart of Mary on City Quay in Dublin.

Children attending City Quay National School were involved in the service, as was Fr Pearse Walsh and relatives of two of the children who died.

One was Canon Barbara Fryday, who is married to the nephew of Neville Fryday, a 16-year-old Tipperary man who lied about his age to enlist in the Canadian army and was shot while in Dublin on leave and wearing his uniform.

Fr Michael Scott is the nephew of eight-year-old Walter Scott, who was shot dead along with school pal by bullet from gunship Helga.

The initiative began when broadcaster Joe Duffy was asked by the Jack and Jill children’s charity to help with fundraising over Easter. He thought Easter was synonymous with the Rising and wondered how many children died in the fighting.

That began his trawl through death certificates, graveyards, newspaper reports and census.

To date he has identified 40 people under 17 years of age, out of the total 374 civilians who were killed during the Easter Rising.

He explained in an interview on Morning Edition on RTE Radio 1 that at that time children would have been out scavenging for firewood and food once the fighting started. In those days children also spent most of their time on the streets. 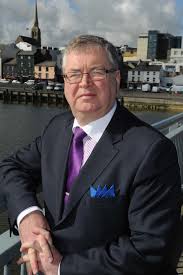 “You can imagine Easter Monday, a warm day, most of the kids were living in one room with 7 or 8 siblings, they were out on the street anyway – who would sit on a tea-chest in the dark all day?” he asked.

Many were killed on the streets. Thirty of the slain were boys and 10 were girls. Five of them were under five years of age, two were toddlers and one is listed as an infant. The children were both Catholic and Protestant.

Sadly many were shot in the head – possibly because both the British Army and the Rebels wanted to deter looting and shot at families who were short of food and out looking for it in the chaos of the fighting.

The names of the young people who died were read out at the service and ran from Bridget Allen aged 16; to Christina Caffery aged two years and four months old who was shot in her mother’s arms in “the precincts of her own home”; to Christopher Whelan 15 years old and only child of a hotel proprietor from North Great George’s Street.

At the service there were 15 families of children who died as well as the Minister for Children and Youth Affairs, Frances Fitzgerald.

It was the first such memorial to the children, and Joe Duffy hopes that a permanent memorial can be placed at the GPO to commemorate them. His research continues as he is sure that more than 40 children were killed.