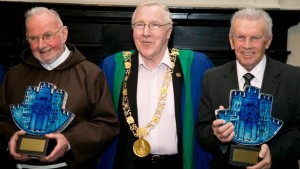 The country’s best known friar, Br Kevin Crowley, was bestowed with the Freedom of the City of Dublin on Saturday evening by the Lord Mayor Councillor Christy Burke.

The Capuchin received the honour along with former Irish international soccer player John Giles at a conferring ceremony at the Mansion House.

Br Kevin and John Giles are the 79th and 80th people to receive the Freedom of Dublin City.

In a statement, Dublin City Council said the friar, who founded the Capuchin Day Centre nearly fifty years ago, which has been feeding the city’s homeless and disadvantaged ever since and the soccer player-turned-pundit and were being honoured “in recognition of their work in the fields of social justice and sport”.

The John Giles Foundation helps young people in disadvantaged areas through sport. Giles’ football career included 59 caps for Ireland. In 2003, he was winner of UEFA’s Jubilee Award which named him best Irish player of the past 50 years. 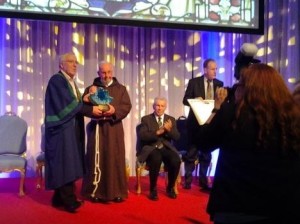 In a statement, the Lord Mayor said it was “a privilege for me to confer the freedom on these two most deserving recipients, Brother Kevin Crowley and John Giles”.

He said the Freedom of the City was the highest civic honour Dublin could bestow.

“I have known Brother Kevin for many years and have always been inspired by the invaluable work that he carries out each and every day at the Capuchin Centre in the city,” the Lord Mayor said.

He continued, “John has been a true leader in his sporting life and has achieved greatness through his skill both as a player and as a manager. By giving this award the city is acknowledging their unique contribution.”

Speaking to RTE News, Br Kevin warned that the homelessness crisis remains critical in Dublin and the city’s drug problem is getting out of control. 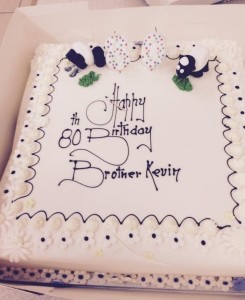 “It’s amazing the number of young people involved in drugs,” he said.

“The drugs scene in our city is absolutely appalling. I plead to the Government to do something, because if not we will have a crisis in our city.”

The first recipient of the Freedom of the City was Isaac Butt in 1876.

Br Kevin Crowley and John Giles were presented with a gift specially commissioned by the city for the occasion called ‘Castles’.

The pieces, by artist Michele Hannan, are made of ceramic and glass on a stone base.