Remarks made by the British comedian, actor and writer Stephen Fry on RTÉ television two years ago are being investigated by the Gardaí to see if they can be considered blasphemous under the 2009 Defamation Act. 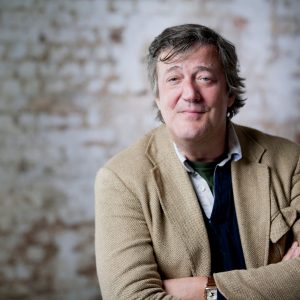 If convicted of an offence under the Act, Mr Fry would be liable for a fine of up to €25,000 for declaring that God was “an utter maniac” during an interview with veteran Irish broadcaster Gay Byrne on the programme The Meaning of Life, which was first broadcast in 2015.

Mr Fry is a self-confessed humanist, so Gay asked him what he would do if, after death, he found himself at the Pearly Gates before either St Peter or God himself. He replied: “I’d say – Bone cancer in children? What’s that about? How dare you? How dare you create a world to which there is such misery that is not our fault? It’s not right, it’s utterly, utterly evil.

“Why should I respect a capricious, mean-minded, stupid god who creates a world that is so full of injustice and pain? We have to spend our life on our knees thanking him? What kind of god would do that? The god who created this universe, if it was created by god, is quite clearly a maniac, an utter maniac, totally selfish.”

Shortly after the programme was broadcast, a complaint of blasphemy against Mr Fry was made at Ennis Garda Station, but it appears no action was taken. The complainant, who has sought to remain anonymous, told the Irish Independent that in 2016 he wrote to the Garda Commissioner asking why no progress was being made on the matter and that in recent months he was contacted by a detective from Donnybrook Garda Station in Dublin who said the matter was being looked into.

The motivation of the complainant are unknown, as he told the Irish Independent that he was not personally offended by the remarks but that he regarded it as a civic duty to report a possible offence of criminal blasphemy. It is likely that the complainant is seeking to use the case to discredit the blasphemy laws.

One of the reasons criminal blasphemy was included in the provisions of the 2009 Defamation Act is that the then Fianna Fáil government believed that it was required to resolve two conflicting provisions in Bunreacht na hÉireann, the Irish Constitution. Article 40.6.1.i. states: “The publication or utterance of blasphemous, seditious, or indecent matter is an offence which shall be punishable in accordance with law.” However, the common law dealing with blasphemy, inherited from pre-independence British rule, deals only with blasphemy against a Christian God, and this is at odds with the provisions of Article 44.2.3 where it is stated: “The state shall not impose any disabilities or make any discrimination on the ground of religious profession, belief or status.”

At the time the blasphemy legislation was being enacted, it was opposed by some, including the National Union of Journalists, who argued that it hampered the basic rights to freedom of religion and freedom of expression.

Others argued that the law was necessary to prevent religious fundamentalists taking the law into their own hands. In many Muslim societies, for example, it is believed that the only just punishment for insulting Allah or the Prophet Mohammed is the death penalty. The British author Salmon Rushdie is under British police protection since 1988 after a Fatwa was declared against him for insulting the Prophet Mohammed in his book The Satanic Verses. However, in the UK the offence of blasphemy was abolished in 2008.

Under Taoiseach Enda Kenny, part of the programme of government is to hold a referendum on Article 40.6.1.i to remove all mention of blasphemy from the Constitution.

Returning to Mr Fry’s remarks, there is nothing especially new about their content, given that they echo those made by the Greek philosopher Epicurus in the third century BC. Indeed, the question, ‘If there is truly a good God then why is there evil in the world?’ is one that is regularly asked and it is a question that tests the strongest of believers.

In the Book of Job, God tells us that his ways are beyond the human ability to understand, so there is a suggestion in the Bible that we accept suffering and trust in God. But in the New Testament, St Paul links physical evil with moral evil, linking Adam’s original sin with the existence of death: “For as by a man came death, by a man has come also the resurrection of the dead. For as in Adam all die, so also in Christ shall all be made alive.”

Much has been written in philosophy and theology about the existence of suffering and evil and it remains a challenging question for many.