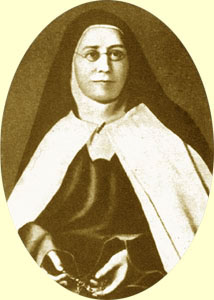 A British convert to Catholicism, who founded a religious order in the 19th century, has just been declared Venerable by the Church.

On Tuesday, Pope Francis authorised the promulgation of a decree concerning the Servant of God, Mary Veronica of the Passion (who was known as Sophie Leeves prior to her profession as a religious Sister).

She established the ‘Apostolic Carmel’, a Congregation of Sisters in India in 1870.

In a private audience with the Pope, Cardinal Angelo Amato SDB, prefect of the Congregation for the Causes of Saints, put forward the name of Mary Veronica and six others who have lived lives of ‘heroic virtue’.

That means, not that they were without sin but that they tried their best to improve themselves spiritually and to grow in holiness. They will all be declared ‘Venerable’.

The next step on the road to sainthood is the approval of one miracle after which Mary Veronica could be beatified. If a second miracle were approved, it would open the way for her canonisation.

Mary Veronica began life as Sophie Leeves in 1823 in Istanbul. She was the daughter of Marina Leeves and Rev Henry Daniel Leeves, a military Chaplain to the British Ambassador.

She was well educated and had skills in writing and music. However, as a teenager she became very prayerful. She felt drawn to the Catholic Church, especially the sacraments of Confession and Holy Communion.

Her mother and others were not pleased, especially when she broke off her engagement to young and handsome naval officer.

She was received into the Catholic Church in February 1850 in Malta where her father was stationed.

The following year, she went to France where she entered the Sisters of St Joseph of the Apparition, and became a professed as a member in 1851 and received the name Sr Mary Veronica of the Passion.

Having worked in several schools in Europe, she was sent to Calicut, India in 1862.

She showed a special love for the less fortunate. She wanted both the rich and the poor to enjoy all the ‘goods of the land’ – God’s gift for his people. She learnt the local language Malayalam.

In 1867, she returned to France to start what became the Apostolic Carmel. She trained three sisters and sent them to India. Shortly after their arrival, the Sisters opened St Ann’s School for Girls.

In 1873, Mother Veronica herself returned to the cloistered monastery, the Carmel of Pau, from there she prayed for her Apostolic Carmel in India for decades until she died in 1906 at the age of 83.

Mother Veronica’s cause of canonisation was taken up by the Sisters of the Apostolic Carmel in 1997.

Tags: Carmelites, Congregation for the Causes of Saints, India, Mary Veronica of the Passion, saint, Sisters of St Joseph of the Apparition, Sophie Leeves