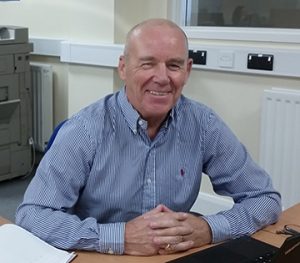 Brendan O’Neill, has been elected Regional President for the Society of St Vincent de Paul in its Northern Region.

This is a volunteer role in which the Portaferry native Brendan will have responsibility for the Society’s 1850 volunteers, 70 paid staff and 32 shops in Northern Ireland. Speaking this week about his new appointment Brendan commented, “Our role is one of service to those in need and that need has increased year on year and will continue to do so, particularly with the advent of the Universal Credit benefit system’’.

He added “Now that the Christmas period is approaching, we expect demands for our services to rocket, as they do every year at this time.  Our volunteers will give selflessly to ensure that the families who contact us, can have toys and food for their children on Christmas morning that they perhaps wouldn’t have had without our intervention.” Brendan continued,  “On behalf of the Society of St Vincent de Paul, a huge thank you goes out to the general public who support us and we ask for their continued support, particularly at this time.  We can’t do what we do without you.”

Meanwhile this week, the St Vincent de Paul (SVP) marked Poverty Eradication Day (17 October) by calling for more support to help the local organisation assist those in desperate need within communities across Northern Ireland.  With no devolved government currently in place, the SVP says it is noticing a marked increase in those seeking its support, which could be the result of a lack of advocacy at legislative level. Brendan O’Neill said, “Some people in Northern Ireland are facing the depths of poverty every day, and due to the political situation, there are no opportunities for groups to campaign on their behalf at governmental level. He added, “We have seen an increase in families and individuals contacting SVP asking for help with the basic necessities since this time last year.  31% of those we have supported in the last year have needed help with food, 21% needed assistance with fuel and 16% required household goods, such as chairs to sit on or a table from which to feed their families’’.

He continued “Many of those whom we support are unemployed single parents living alone in rented accommodation, surviving on basic benefits.  In some cases they have to choose between heating their home for their children and feeding them; a choice no-one should have to make. Our network of volunteers makes hundreds of visits per week to families and individuals, offering a shoulder to lean on and a helping hand, where possible.  What they see can be shocking and is leading to raised levels of frustration. There should be activists proactively speaking up for those in need and, indeed,a platform from which to do so.”

He concluded “Our hope for Poverty Eradication Day 2017 is that governmental stability can return soon, which can offer us opportunities to speak on behalf of those in desperate need, who are currently, without a voice that can engender any positive change.”