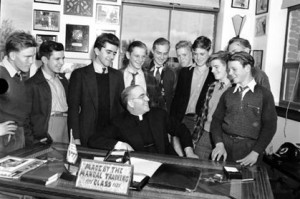 Fr Edward Flanagan, founder of Boys Town, didn’t ‘blow the whistle’ on Ireland’s industrial schools as claimed by the late Mary Rafferty in her book ‘Suffer Little Children’, according to historian Daire Keogh.

In a lecture in the Central Catholic Library, Dr Keogh acknowledged the good work Rafferty had done in exposing the abuses of children in care, but said that his research clearly showed that she was mistaken in saying that Fr Flanagan had ‘blown the whistle’ on the industrial schools and had described them as akin to ‘concentration camps’ when he visited Ireland in 1946.

Keogh, who is working on a history of the Irish Christian Brothers, was told of Fr Flanagan’s condemnation of industrial schools during his research, so he went to Boys Town to examine the archives.

What he found didn’t support the allegations.

“What he was concerned about,” Dr Keogh explained, “were the borstals, and the penal system, which he described as a disgrace to a Christian country.”

From Ballymoe, Co Roscommon, Fr Flanagan was ordained for the Archdiocese of Nevada and worked with Irish-American families.

Confronted by the poverty of the people and the amount of children sucked into crime by the cycle of poverty, he borrowed $90 from a Jewish friend and set up a home for five boys, which became the origin of Boys Town.

“He established a new philosophy of childcare,” said Keogh. “There was no sectarian slant, he took in anybody. ‘There’s no such thing as a bad boy’ was his mantra, and all they needed were love, care and encouragement.”

“The front door was never locked, and Boys Town was racially mixed. He was very radical – ahead of his time. It was not an orphanage, it was a home and a school.”

When funds permitted, Fr Flanagan bought 220 acres and set up Boys Town, with its own system of self-government; the boys elected their own mayor and commissioners, and set up their own courts.

‘A busy boy is a better boy’ was another of his sayings, and busy boys became useful citizens. The town had an athletics programme, a choir and touring band with its own bus.

“He managed to capture the public imagination,” said Keogh. “It was the great American dream, that people can do well and overcome adversity in a land of opportunity.”

It helped that Flanagan was a charismatic figure, and in 1938, Spencer Tracey won an Oscar for his performance as Fr Flanagan in the film ‘Boys Town.’ Fr Flanagan himself won a lot of awards for his pioneering work.

When he visited Ireland in 1946, he spent a month touring, and everywhere he went he was greeted as a returning hero.

The Irish Catholic described him as “tall and rugged with an easy manner, with a charming American accent that only Irish exiles achieve.”

According to Keogh, one person who wasn’t impressed was the anonymous priest who sent a report to Dublin’s Archbishop McQuaid: “Fr Flanagan wouldn’t last a week in an inner-city parish.”

“He was there for three hours,” said Keogh, “and he complimented the Brothers on their work of rehabilitating the boys.”

His one regret was that the school was so poorly equipped. “They deserve better for their work,” Fr Flanagan commented.

When he visited Artane, the flagship of the industrial schools system, Dr Keogh said Fr Flanagan reported, “It has been my good fortune to visit Artane. The boys receive magnificent training and can’t go wrong because they feel they belong somewhere and that is so important.”

It was after this visit that Fr Flanagan was handed a book called ‘I Did Penal Servitude’. Horrified by what he read, Dr Keogh noted that “Fr Flanagan flipped his speeches from that moment, and called the Irish prisons a disgrace.”

When he returned to the US, he repeated his criticism, and the reaction in Ireland turned against him, led by the politicians.

Minister Gerry Boland said, “Fr Flanagan is out of his depth and has no first hand knowledge of what he is talking about.” Dr Keogh commented: “the irony was that half the Cabinet had been in prison.”

Fr Flanagan was anxious to encourage debate on reform of the penal system, and “lamented the failure of the Irish to discuss things as a result of fear.”

In this regard, he became more critical of the Catholic Hierarchy and commented: “I wonder what God’s judgement will be on those who hold the Deposit of Faith?”

Fr Flanagan announced his intention to tour Irish prisons, but died suddenly in May 1948, while on a visit to Berlin.

Dr Keogh noted, “His passing went quietly in Ireland, whose people seemed happier with the priest on celluloid than in reality.”

The cause for Fr Flanagan’s canonisation has been taken up by the Archdiocese of Omaha in 2012, and he has been named a Servant of God, the first step in the process of canonisation.