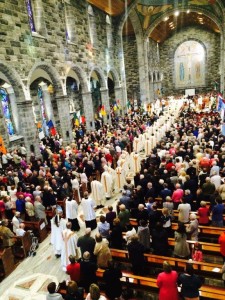 The chief celebrant of the jubilee Mass was Cardinal Seán O’Malley, who flew in specially for the occasion.

He was following in the footsteps of his Boston predecessor, Cardinal Richard Cushing, who represented Pope Paul Vl at the dedication of the Cathedral in 1965.

“It is a joy and privilege for me, as Archbishop of Boston, to be here today to mark the 50th anniversary of the solemn dedication of this magnificent temple which betokens the presence of God in the midst of the city,” Cardinal O’Malley said in his homily.

He expressed best wishes on behalf of the Catholics of Boston, “who hold your people and your country in our hearts with great affection, esteem and solidarity.”

He said that almost half the population of Boston is Catholic, and this is in no small part due to the Irish people who left Ireland during the famine and started anew in Boston.

The special Mass at the Cathedral of Our Lady Assumed into Heaven and St Nicholas, was concelebrated by Bishop Martin Drennan, the Papal Nuncio, Archbishop Charles Brown, and Bishop Brendan Kelly of Achonry who is a native of the diocese, as well as a large number of active and retired clergy of the diocese.

The leaders of the main Christian Churches in the city were present, as were the leaders of Galway’s Muslim communities. 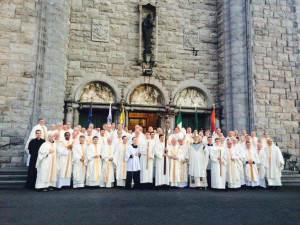 In his homily, Cardinal O’Malley spoke of the deep historic links between the United States and Ireland and particularly between Boston and Galway.

The Cardinal is a native of Ohio and is proud of his Irish roots, as his great-grandfather came from Westport.

He spoke of how his O’Malley ancestors brought with them from Co Mayo a statue of the Sacred Heart and a beautifully bound two-volume history of Ireland.

Many of those who worked on the cathedral, or who were altar servers, choir members, ushers and volunteers on the opening day fifty years ago were also present.

The Cathedral Jubilee Choir sang under the direction of Ray O’Donnell. Three young deacons who will be ordained priests for the Diocese of Galway over the coming months, John O’Halloran from Kilannin, Michael King from Renmore and Daniel Gallagher from Bohermore, were also present.

Speaking afterwards, Fr Martin Whelan, who works in the cathedral said, “The Jubilee Mass was a deeply moving experience and we are delighted that so many people joined us for this very special celebration. We deeply appreciate the goodwill and the generosity of spirit shown by so many people in recent days that made the event such a fitting commemoration of this fine building.”

In his closing words on Friday evening, Canon Peter Rabbitte encouraged the people of Galway and beyond to come in and explore the cathedral to experience its magnificence, its artistry, and most of all, to experience its capacity to accept, to sooth and to heal.

The popular singing trio, ‘The Priests’ sang in the cathedral on Sunday evening to a large audience and many more events are planned for the Jubilee. 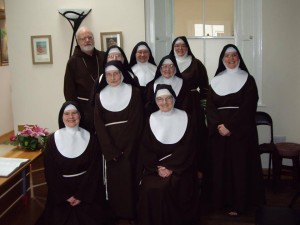 The Poor Clare Sisters in Galway welcomed Cardinal O’Malley, along with four priests of his archdiocese, to concelebrate Mass in their chapel on Sunday morning.

Cardinal O’Malley, a Capuchin Franciscan, expressed his joy at having the opportunity to visit with the Sisters who are part of the Franciscan family in Galway.

After the Mass he and his pilgrim group from Boston met briefly with Sr Paul, the Abbess of the community, and she presented the Cardinal with a Holy Name plaque for the Holy Cross Cathedral in Boston.

He knew what it was and explained to his group that the Holy Name plaques originated with a Franciscan, St Bernardine of Siena, and are commonly to be seen over the doors of houses in Galway city.