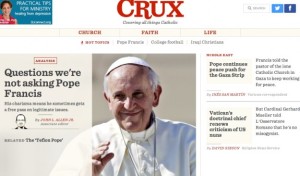 The Boston Globe has launched a new website which is dedicated to news and issues relating to the Catholic Church, faith, spirituality and Catholic lifestyle.

The free, standalone website can be found at www.cruxnow.com.

Crux provides national and international news and analysis of the Catholic Church and the practice of Catholicism, with a focus on how news from the Vatican and how the words and actions of Pope Francis affect Catholics worldwide.

The website has brought high profile journalists and editors such as John L. Allen Jr, considered one of the premier Vatican commentators. He will serve as an associate editor for Crux.

Teresa Hanafin, who worked for 29 years for the Boston Globe, has been appointed editor of Crux.

According to Boston Globe Editor Brian McGrory, “Now is as good a time as I’ve ever seen to launch a site like this. The Pope is a champion of inclusiveness, openness and social justice, and he has reignited interest in the Catholic faith and faith in general.”

He added, “We saw an opportunity to fill a need. There’s a real hunger. We’re at a unique moment.”

He believes the website’s content will appeal to a broad swath of people from active Catholics who regularly follow religious news, to ‘casual’ Catholics who may not be regular Mass attendees, to those who are simply interested in Pope Francis, and those who are eager to explore spirituality in general.

“We are going to explore traditional Catholic life within the context of modern day Catholicism, as well as give full voice to disagreements and challenges within the Church,” Teresa Hanafin said.

Reporters at Crux will approach coverage from a journalistic point of view, rather than one of advocacy or evangelism.

Globe media has said readers can expect to see contentious topics discussed, including abortion, gay marriage and the role of women in the church.

“Crux is not just about the Church, but about life and faith,” David Skok, Boston Globe Digital Adviser, said.

“Our goal is to make the site as inclusive as possible. It is journalistic above all else, so we are not coming at this with any ideological bent.”

However, according to John Allen JR many religious news sites can be too close to the story, either backed by the Church or sponsored by Catholic groups.