New book on church patronage of schools in Ireland 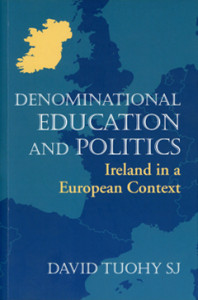 A new book by educationalist Fr David Tuohy SJ, which seeks to widen and deepen the debate around denominational education in Ireland, will be launched on Wednesday 17 September in Milltown Park in Dublin.

Jesuit Provincial, Fr Tom Layden will launch the book which is titled, ‘Denominational Education and Politics: Ireland in a European Context’.

The Church of Ireland Archbishop of Dublin, the Rt Rev Dr Michael Jackson and RTE’s Roisin Duffy will speak at the event.

Fr David Tuohy believes the current debate in Ireland about Church patronage of schools can be unsatisfactory and inadequate and often is narrow-minded and ill-informed.

The Jesuit is a lecturer and educationalist. He was the academic advisor to the School Development Planning Initiative and has lectured in UCD and NUI Galway and worked in the US, Australia and East Africa.

He is a former project director of Le Chéile, a trust set up by thirteen religious congregations for their schools.

One of his aims is to clarify the terminology used in the debate and draw attention to the way in which confusion in the use of language often leads to a breakdown in communication.

According to Fr Tuohy, there is not even a shared understanding of what is meant by ‘Catholic education’.

“When some people speak of ‘Catholic education’ they have a notion that relates to the 1950s or 60s. Their experience may relate back to pre-Vatican II schooling and philosophy and they may have no further insight into the profound changes that have taken place since then in the theory and practice of catholic education,” he said ahead of the launch.

Other concepts like ‘rights’ and the ‘common good’ often suffer a similar fate in the heated debates that take place around denominational education in Ireland. The author seeks to clarify these issues also.

Speaking to Pat Coyle of the Jesuit Communications Centre, Fr Tuohy said the use of the term ‘the common good’ often meant different things to different groups.

“The use of the term common good has changed quite a bit over time and often people say they are working towards the common good, sometimes there is nothing that is common at all in terms of a shared vision, it is a way of just keeping the lowest common denominator moving,” he said.

In an effort to broaden and deepen the debate in Ireland, he draws on the political context of Europe to examine issues such as the separation of church and state and religious freedom and education.

One of his findings, for example, is that many European countries, in spite of their secular ethos, are almost as vigorous in their support of denominational education as of state education.

“They endorse the right of parents to educate their children in accordance with their world view, be it religious or secular, and they have a strong commitment to the notion of religious freedom.”

The book looks back at the history of Irish education, and shows a complex interplay between the state and the church.

One of the things that surprised the Jesuit author was the level of philanthropy in the setting up of Irish schools before the establishment of the state system.