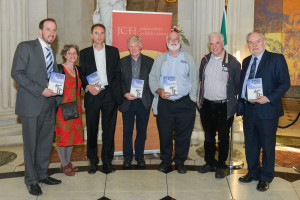 There is need for a ‘re-imagining’ of imprisonment according to a newly launched publication from the Jesuit Centre for Faith and Justice.

‘Re-imagining Imprisonment in Europe: Effects, Failure and the Future’, stems from the proceedings of an international conference which was held in Dublin in September 2012 organised by the Jesuit Centre for Faith and Justice on behalf of the Antwerp-based Jesuit Scribani Network.

The new book was presented to President Michael D Higgins last week in Áras an Uachtaráin.

It highlights the need to ‘re-imagine’ the role of imprisonment in contemporary society, so that it truly becomes the penalty of last resort and, where its use is necessary, it operates in a humane and rehabilitative manner.

The book was launched in City Hall by Fr Greg Boyle SJ, who was formerly a chaplain in Folsom State Prison, California and is now Executive Director of ‘Homeboy Industries’, a non-profit organisation working with ex gang members in Los Angeles.

Speaking at the launch, Eoin Carroll, who co-edited with Dr Kevin Warner, said the “aim of the conference was to analyse some of the key features of imprisonment throughout Europe today, including the political, social and economic forces shaping prison policy and practice, and to imagine what future imprisonment might look like – in terms of prison policy, prison population size and prison conditions – by generating a new narrative of how imprisonment might be framed within a new vision and set of values.”

He said the conference provide space for thinkers and doers, both academic and practitioners. There was real engagement between policy makers, advocates, practitioners and academics, he observed.

Noting that the conference was not an end goal in itself; he said this was also true of the book.

Eoin Carroll also highlighted in his address that the Jesuit Centre for Faith and Justice had previously articulated that prison must reflect a number of key principles, including:

• It is the deprivation of liberty which constitutes the punishment of imprisonment: namely that people are sent to prison as punishment, not for punishment.

• People in prison must be treated with humanity and respect for their inherent dignity.

• The prison system must seek to promote the rehabilitation and social reintegration of those imprisoned.

• Given that it is the loss of freedom which constitutes the punishment, and given the goal of rehabilitation, then life inside prison should be as normal as possible, with security no greater than is required for safe custody.

• The use of imprisonment should be kept to a minimum.

He said these principles are referred to directly and indirectly by the various contributors to the book.

One of the contributors, Juliet Lyon, Director of the Prison Reform Trust in the UK, argues that ‘re-imagining imprisonment’ must first of all reduce prison populations to the ‘unavoidable minimum’.

This involves the restricting its use “to the comparatively few whose offending is so serious that no other punishment can be justified”.

She and other contributors draw attention to the significant increase in prison numbers that has occurred in many, though not all, European countries in recent decades, and the reality that in many cases sentences of imprisonment have become lengthier compared to earlier decades.

Ways to reduce prison populations are outlined in a number of papers published in the book including one by Tapio Seppala. He describes how Finland, through better social policy reduces the numbers being sent to prison.

A number of authors argue the importance of a prison’s size advocating for smaller prisons. One such author is Baroness Jean Corston in her chapter on women in prison. In Ireland today 85 percent of people are in prisons that accommodate 200 or more.

Recalling the presentation of a copy of the book to President Higgins last week, Eoin Carroll said the President’s passion and commitment to social justice was clearly evident at the meeting and referred to the President’s role as Patron of the Irish Penal Reform Trust.

Eoin Carroll also expressed his satisfaction that the practice of ‘slopping out’ in Mountjoy has ended and would soon end in other prisons.

In the Foreword to the book, John Lonergan, former Governor of Mountjoy Prison, notes that negative prison policy change occurs without any strong public or political reaction.

An example of this, he gives, is how the Irish prison system has over the past thirty years abandoned the principle of single cell occupancy – a principle which was established in England and Ireland as far back as the early nineteenth century.

Various authors outline the importance of rehabilitation and reintegration in the role of the prison. Petrovec and Plesnicar give an account of therapeutic prisons that were popular in Slovenia.

These prisons were having a positive effect on reducing repeat offending but were discarded in the 1980s and 1990s when Western European practices became popular.

This influence also resulted in a more negative public attitude to people in prison and when they left prison.

A number of the publication’s authors have written about the effects of imprisonment and how prison casts a shadow over the rest of a person’s life and the life of their family.

“In particular, the pain and suffering of women in prison, the majority mothers, is poignantly described in two chapters by Baroness Corston England and Wales and Granja, Portugal,” Eoin Carroll said.

This, he underlined, would require a dramatic reduction in the more than 1.6 million people in prison globally, of which 400,000 suffer from mental health issues.

“Given the way prison damages people, it is not a particularly sensible way of dealing with society’s problems,” Eoin Carroll said.