Home > Featured > A blessed row! Beatification of Irish-American postponed amid claims of sabotage

A blessed row! Beatification of Irish-American postponed amid claims of sabotage 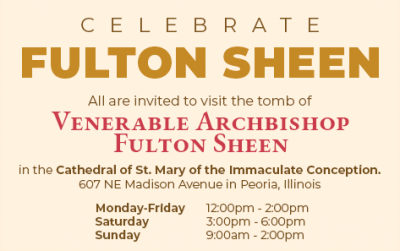 The beatification of an Irish-American archbishop, Fulton Sheen, has been postponed indefinitely amid allegations of inter-diocesan sabotage.

Less than a month ago, Bishop Daniel Jenky of Peoria announced “with great joy and thanksgiving” that Pope Francis had approved the beatification of Venerable Fulton Sheen next Saturday, 21 December.

The ceremony was due to take place at the Cathedral of St Mary of the Immaculate Conception in Peoria, where Archbishop Fulton’s remains are entombed, and prior to the beatification, the cathedral was to hold a novena honouring the venerable churchman.

However, on Tuesday 3 December, 15 days after the beatification had been announced, Bishop Jenky was forced to issue another statement, this time “with deep regret”, announcing that the Holy See had ordered that the beatification be postponed. In the meantime, the novena continues at the cathedral which lies about 165 miles southwest of Chicago.

At one time Fulton Sheen was the best-known Catholic priest in the United States. For 20 years, from 1930 to 1950, he hosted a national radio programme, The Catholic Hour, on NBC. In 1952, he moved to television and presented Life is Worth Living, and then The Fulton Sheen Program, twice winning Emmy Awards for ‘Most Outstanding Television Personality’. Indeed, some describe Sheen as one of the world’s first televangelists. Since 2009, his shows have been rebroadcast by EWTN.

Born in 1895, Sheen’s parents’ families both came from Croghan in County Roscommon. He was baptised John Peter Sheen, but was known as Fulton, which was his mother’s maiden name. 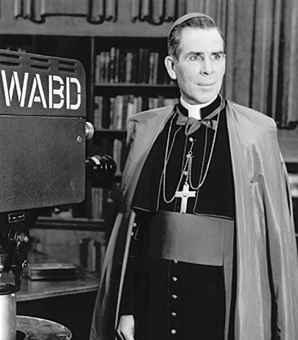 The cause for his canonisation was officially opened in 2002 and approval for his beatification was given after his intercession was credited with a miraculous cure. However, several members of the United States Conference of Catholic Bishops are believed to have asked for a postponement because of concerns that he may not have acted proactively enough to combat clerical child abuse while he was Bishop of Rochester, a post he held between 1966 and 1969. Previously, following his consecration to the American hierarchy in 1951, he had served as an auxiliary bishop in New York.

In his statement announcing the postponement, Bishop Jenky said: “The Diocese of Peoria observes that the life of Fulton Sheen has been thoroughly and meticulously investigated. At every stage, it has been demonstrated definitively that he was an exemplary model of Christian conduct and a model of leadership in the Church. At no time has his life of virtue been called into question.

“The Diocese of Peoria remains confident that Archbishop Sheen’s virtuous conduct will only be further demonstrated. This development is unfortunate especially because there continue to be many miracles reported through Sheen’s intercession. Several have even been reported since the announcement of the Beatification date.”

The Vicar General of the Diocese of Peoria, Msgr James Kruse, was less circumspect. He issued a statement accusing the Rochester Diocese of “sabotage”. Msgr Kruse has been closely involved in the canonisation cause, including the investigation of the miracle attributed to Sheen’s intercession that allowed Pope Francis to approve the beatification. The vicar general said that the neighbouring diocese had raised concerns about how Sheen dealt with allegations against two priests, Gerard Guli and John Gormley, but that both these matters were fully investigated by the Vatican and it was found in both cases that “Sheen did nothing wrong”.

Furthermore, Msgr Kruse says that a Rochester Diocese statement that there were “two or more undisclosed cases” involving mismanagement by Sheen was an “unjust and a regretful smear of Sheen”.

Msgr Kruse says that the revelation by Rochester Diocese is part of a pattern where every time the Sheen cause takes a step forward, the Rochester Diocese acts to block the beatification. “When examining the pattern,” said the vicar general, “it is hard not to believe that the Diocese of Rochester acts more to sabotage the cause and less to protect the good of the Church.”