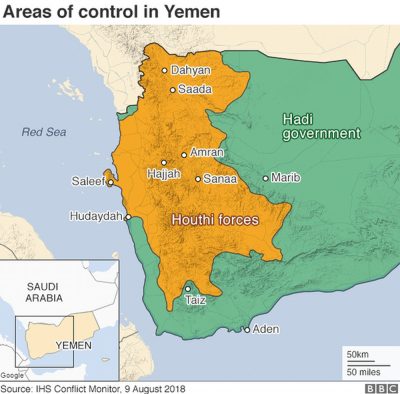 As Yemeni peace talks begin in Sweden, the Irish Catholic bishops have appealed to the public to support Trócaire’s Christmas Appeal which focuses on the plight of those affected by conflict in the region.

The war in Yemen is considered to be the world’s worst humanitarian crisis. Already 85,000 children have died of starvation, and cholera is an ongoing problem. An estimated 2.3 million people, including one million children, are internally displaced. Half of Yemen’s population, an estimated 14 million people, are on the brink of famine, with 22 million people in need of emergency aid. According to the UN, 1.8 million children are severely short of food and 400,000 are suffering from life-threatening malnutrition.

“We are deeply concerned at the worsening crisis in Yemen,” the Irish bishops said in a statement. “The lives of millions of people have been put at risk through the actions of leaders who engage in conflict without a care for the lives of civilians. We thank Trócaire for the work of its personnel who are providing medicine, safe water and aid to thousands of people in Yemen. This is a lifeline that we, as Christians, must support and strengthen.”

The peace talks, brokered by the UN, bring together delegations from the Yemeni government and the Houthi rebels. Already a prisoner swap has been brokered which will see the reunification of thousands of families.

The talks have been welcomed by NGOs working in the region.

War in Yemen began in early 2015, when the Houthis seized control of much of the west of the country, forcing President Hadi to flee abroad. Alarmed by the rise of the Houthi (aligned with Iran), the United Arab Emirates, Saudi Arabia and other Arab states intervened to restore the government. The last peace talks took place two years ago.

Neither Saudi Arabia and its allies nor Iran are represented at the talks, which have been labelled as “consultations”, as the parties are so far from each other. The hope is for the talks to lead to a road map towards peace.

“Expectations are low,” said one commentator. “If they can agree to keep on talking, that’ll be a success.”

Access within Yemen is severely limited and the security situation is precarious. As such, Trócaire does not have a direct presence there, but it partners with Islamic Relief. Already it has contributed €250,000 to a project located in Sana’a Governorate which provides 1,500 families with safe drinking water and improved hygiene.

Niamh McCarthy from Trócaire told CatholicIreland.net that a recent escalation of violence in Al Hudaydah has heightened fears of food shortages.

Trócaire’s Christmas Appeal also focuses on South Sudan, where over 4.5 million people have been displaced by fighting. In their statement, the bishops said the conflict had not received adequate attention from the world’s media.

“Approximately 85 per cent of South Sudanese refugees are women and 65 per cent are children,” the bishops said.