US bishops highlight suffering of immigrants 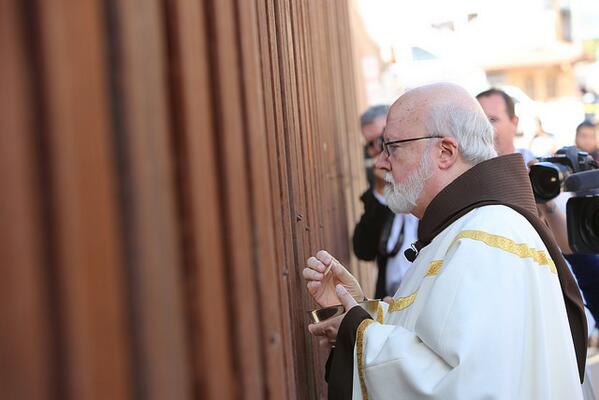 Cardinal Sean O’Malley led a group of US bishops in celebrating Mass at the Mexican border on Tuesday to call attention to the suffering of immigrants.

“The system is broken and is causing untold suffering and a terrible waste of resources, human and material,” Cardinal O’Malley said in his homily, which he delivered in Spanish.

He had travelled to Nogales, Arizona, along with several other bishops, to highlight the immigration problem.

The US bishops’ conference continues to press for comprehensive immigration reform.

The bishops concelebrated Mass near the border fence, in a section that is notorious for illegal immigration.

During the Eucharistic celebration, bishops administered Communion through the fence to dozens of people who had crowded on the Mexican side of the border for the Mass.

Following the example set by Pope Francis during his visit to the island of Lampedusa, they placed a wreath to honour the hundreds of people who have died seeking to enter the US.

Cardinal O’Malley remarked that “the border is lined with unmarked graves of thousands who die alone and nameless.”

In his homily, the Cardinal remarked that Samaritans were regarded by the Jewish people of Jesus’ time as aliens, yet the Good Samaritan became the Christ’s model for proper treatment of a neighbour.

“We come here today to be a neighbour and to find a neighbour,” he said.

He reminded the congregation of over 50 people, “The author of Hebrews urges us to practice hospitality, for through it some have unknowingly entertained angels.”

Al Melvin, a Catholic who is campaigning for the Republican nomination in the race to become governor of Arizona, criticiced the bishops’ presence, saying that they were “irresponsible” to encourage immigrants.

“They are not bringing stability to the border,” he said. “They are adding to the chaos of the border.”