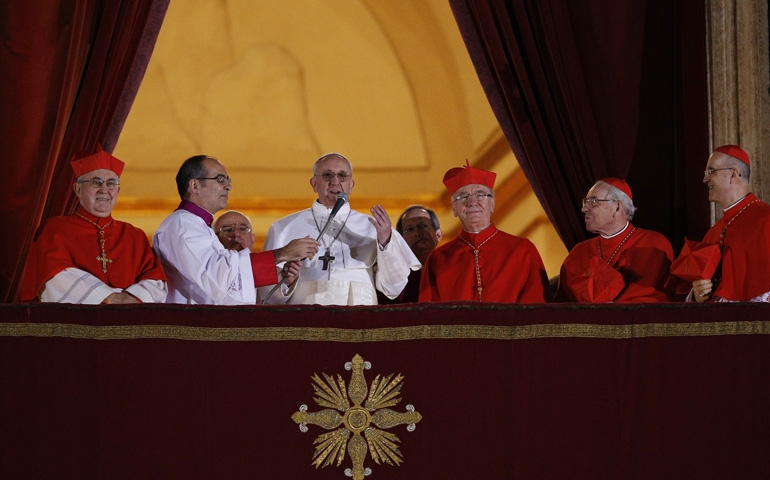 “Warm wishes” have been sent to Pope Francis from the Irish bishops for the first anniversary of his election to the Chair of Peter which he marks today.

In a statement issued at the end of their spring general meeting in Maynooth, the Irish Bishops Conference (IBC) issued a message of congratulations to Pope Francis.

In it the IBC said that from his humble introduction during his first urbi et orbi where he requested the prayers of people across the world, Pope Francis “has truly captured the imagination, hearts and minds of women and men in Ireland and beyond.”

Joy and mercy have thus far been key messages of Pope Francis’ ministry they suggested.

“These sentiments have been beautifully captured in his first Apostolic Exhortation, Evangelii Gaudium (The Joy of the Gospel), which Pope Francis published on 24 November last.”

The bishops said that the first year of the Pontificate of Pope Francis has not only been captured in words, but also in the many images witnessed of the Holy Father reaching out to those on the margins and evangelising through action as well as words.

The Bishops said, “We are all challenged by the Holy Father’s call to reach out to the margins. We wish Pope Francis health and happiness for his future ministry.”

They prayed that the Holy Spirit would “pour out upon him in abundance and bless him with all the gifts needed to shepherd the flock of the Catholic Church, and to strengthen all your brothers and sisters in the faith and to be an inspiration to all people of goodwill throughout the world.”

The Bishops also encouraged the faithful to pray to Pope John XXIII and Pope John Paul II who will both be recognised as saints next month to ask them to intercede for the renewal of the Church in Ireland at this time.

On Sunday 25 April the Universal Church will celebrate the canonisations of the two pontiffs at the Vatican.

Pope John XXIII will always be remembered as the Pope who called the Second Vatican Council (1962 – 1965), whose 50th anniversary we celebrate at this time.

In October 1958, he was elected Pope, just a month short of his 77th birthday.

Many assumed he would be a ‘caretaker’ pope but instead his short pontificate was not only marked by his calling of the Vatican Council – which has had such an impact on the life of the Church – but he also penned eight encyclicals in his five years as pope.

Two of these in particular stand out: Mater et Magistra, an important social encyclical, where Pope John XXIII states that a Christian must, in addition to being concerned with a person’s spiritual well-being, also look out for their health, education and general well-being: “the economic prosperity of a nation is not so much its total assets in terms of wealth and property, as the equitable division and distribution of this wealth” (74).

The other is Pacem in Terris, where he argues that real peace does not lie in building up armaments, but, rather, in building mutual trust.

Pope John Paul II is fondly remembered by many, and much loved in Ireland.

In his inauguration homily, he invited people to “open wide the doors to Christ” and encouraged them not to be afraid – themes which percolated through his papacy.

For Irish people, the standout memory is of Pope John Paul’s apostolic pilgrimage over three days in 1979, when he visited Knock, Galway, Limerick, Drogheda, Maynooth and Dublin.

Those who were able to be present will never forget and now, almost thirty-five years later, how easy it is to recall his uplifting words in Galway: “Young people of Ireland, I love you!”; and in Drogheda, when he implored, “On my knees I beg you to turn away from the paths of violence and to return to the ways of peace.”

Throughout his papacy John Paul II was unafraid to confront issues such as the protection of human life, justice, solidarity and peace, as witnessed in his dealings with Communism, and his opposition to the war in Iraq.

Our enduring memory of Pope John Paul is of his final days, when he bore his suffering with dignity and reminded us of the value of human life in all its stages.

Throughout his life and his papacy he defended the Gospel of Life from conception until its natural end.  His death was his final witness before he was called home to our Father’s house.

Separately, the Irish bishops expressed their deep gratitude to everyone who contributed to the nationwide church collection on 16 and 17 November 2013 to support those affected by the crisis in Syria, the wider Middle East and Typhoon Haiyan in the Philippines.

This special collection raised in excess of €5.3 million.

Chairman of Trócaire, Bishop William Crean, responded to the Government’s decision not to fulfil its pledge to reach the UN target of 0.7% of Gross National Income (GNI) by 2015 in its overseas aid budget.

In Wednesday’s statement, Bishop Crean said that “Given the nature of funding cuts that have taken place within the overseas development aid budget since 2008, I  am very disappointed that the Government will not be keeping its commitment to meet the UN target on overseas aid in next year’s budget.”

He warned that this was not the first time that there has been an announcement that the aid target would not be met.

“I am very concerned that the Government has not outlined a new date or time-line for achieving this long-standing commitment, despite it having been a pledge of successive governments since 2000,” he said.

“There will always be reasons given as to why the Government cannot commit to certain obligations. However in this case, it will be the poor and the most vulnerable who will suffer as a consequence.”

He added that Irish overseas aid funding makes a crucial difference to the lives of millions of marginalised people.

“Having recently seen our programme work which is part-funded by the Irish Government, in places like Malawi, this funding is an issue of life or death for people living in extreme poverty across the developing world.”

“I would urge the Minister for Trade and Development, at the earliest possible opportunity, to clearly set out how Ireland is going to meet our obligations to this UN objective.”

“There is currently a review of Ireland’s foreign policy underway, and given the importance of this issue, the government should use the context of this review to set out a clear roadmap for meeting our 0.7% commitment,” he said.

It will be given by Fr Agbonkhianmeghe E Orobator SJ on the theme: ‘Water has no enemy: ethical narratives, claims and conflicts surrounding accessibility to water in sub-Saharan Africa.’