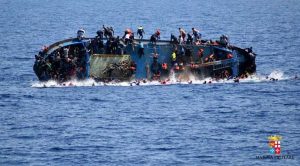 On World Refugee Day and the Feast of the Irish Martyrs, the bishops reiterated their support and solidarity for children, women and men refugees and migrants as well as for persecuted Christians.

The Bishops’ Conference discussed the refugee crisis earlier this month at their summer general meeting and said policymakers must not close their eyes to the needs of those currently “in dire need” in Europe and further afield.

The bishops stressed that the numbers fleeing from war and persecution are on the increase and the level of solidarity is “often inadequate”.

Referring to the parable of the Good Samaritan, Archbishop Diarmuid Martin noted that the two figures of officialdom “turn their eyes away and pass by the presence of a fellow human in distress”.

He said, “Today our witness to the distress of refugees should be a call to action.”

While praising the “brave and humanitarian role” of the naval service in the Mediterranean, the bishops expressed concern that in Ireland the process of taking refugees seems to have been allowed to “slip to the back-burner of politics, notwithstanding the clear desire and willingness of citizens and communities to commit to a culture of welcome”.

Prayers are to be offered at Masses throughout the month of June for persecuted Christians, refugees and migrants.

The bishops also noted with concern the “lack of significant progress” regarding the condition of asylum seekers in direct provision centres and encouraged people to lobby their politicians in the areas where centres are situated.

Archbishop Eamon Martin of Armagh will lead a delegation from the Bishops’ Conference to Erbil in the Kurdistan Region of Iraq in November.

The area is now home to hundreds of thousands of displaced people, mostly Christians and Yazidis, who were forced to flee from their homes in northern Iraq as a result of war.

The delegation will be hosted by Archbishop Bashar Warda of Erbil, and it will have the opportunity to meet with communities displaced by conflict and who face an uncertain future in the region.

Trócaire, which has supported relief efforts for displaced people in northern Iraq, will have staff participating in the visit including its chairman, Bishop William Crean of Cloyne.

The delegation will also have the opportunity to meet with UN representatives as well as with other agencies responding to the crisis in the region.