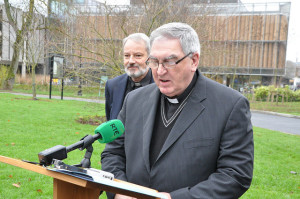 The Chair of the Bishops Council for Marriage, Bishop Liam Mac Daid, has said the family has, in many people’s view, taken quite a bashing in recent years and needs more than anything else support and stability from all sides.

In his pastoral statement which was read at Masses in the diocese of Clogher at the weekend, the bishop emphasised that if people have serious reservations about what is proposed in the referendum, they have a responsibility to say so to the Government.

“There are many who, while supportive of what the Government is trying to achieve in giving acceptance and rights to same sex unions, believe that a great deal more careful thinking and analysis will have to be done if we are to avoid making further problems and difficulties for families and society,” he stated.

He warned that marriage and the family are too important an area to tamper and to experiment with.

“The Constitution of Ireland is too important a document to allow major changes to its articles, with serious consequential outcomes, to be introduced lightly in this vital area. Before we make any major changes, further reflection will be needed,” the bishop commented.

“Getting it wrong will almost inevitably further destabilise the family and society; it will pose major problems for legislation and enforcement in a society where a rich understanding of marriage and family is already in place and rooted over centuries,” he warned.

Elsewhere in his pastoral statement, the Bishop of Clogher said that to appreciate the kind of difficulties that will arise “we need only ask ourselves – in the proposed new dispensation what will we be expected to teach our children in school about marriage and the family?”

He underlined that members of the Catholic Church in general do accept the right of gay people to form their own relationships and to have the rights and responsibilities inherent in these relationships enshrined in law.

“In this way, human rights are acknowledged and we can live together in an atmosphere of mutual respect and tolerance,” he said.

However, he expressed concern over the fact that the Children and Family Relationship Act 2015 proposed to remove all mention of mothers and fathers from a whole raft of previous legislation and that in expectation of approval by those who vote in Friday’s referendum, the Government was “already preparing a sheaf of legislative changes to take account of the situation which they expect to emerge”.

Many good-living and responsible people have grave misgivings about the capacity of our own or any civil government to make provision for all the needs that would have to be catered for if same sex unions and our traditional Christian understanding of marriage and the family are treated as essentially the same, he said.

Dr Mac Daid added that many would legitimately contend that there are other ways, still to be fully explored, where the rights and needs of same sex unions could be respected and protected while the traditional Christian ideal could be accorded its rightful place as the choice of the clear majority of our people.

“Before we make any major changes, further reflection will be needed,” he urged people. 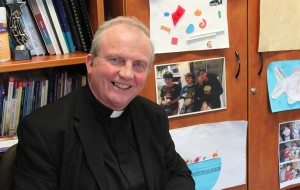 Separately, at a public meeting on Monday evening in Inishowen Co Donegal, the Bishop of Derry warned that the proposed change is not just a new law or regulation which could be checked against a higher document.

“The constitutional family is considered to be core to what we are as a country: ‘the state pledges itself to guard with special care the institution of marriage, on which the family is founded and to protect it against attack’ (Art. 41.3.1).”

He said the Constitution supports marriage, not for theological reasons, rather because it believes – in common with most other countries – that stable marriage serves the common good of society.

The wording that voters will be asked to decide upon on Friday is a major change to what the State says it understands about the family, he warns.

“I understand that many people in the LGBT community have been discriminated against, and have suffered much. However, the right to have a relationship recognised by the State has been acknowledged through civil partnerships. What seems to be at stake here is the wish to be able to call that relationship ‘marriage’, and to have this relationship seen as being as normative as any other relationship.”

He said those who have proposed this referendum seem to have focused solely on the rights of some adults who want to have their relationship called ‘marriage’, with no deep consideration of the effect that this significant change might have for this and for future generations in Ireland. 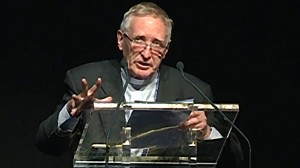 Meanwhile, Irish philosopher Fr Brendan Purcell has warned that a Yes vote would make marriage a victim of what Pope Francis has called the throwaway culture.

In his article, ‘From tandem to time bomb: the unravelling of the Irish Constitution by Same Sex Marriage’ published by www.CatholicIreland.net here: Fr Purcell writes, “I think we’d all agree that a society can be judged on how it treats its defenceless and most vulnerable members. Passing the proposed SSM amendment increases the danger that children’s upbringing and need for a mother and father will become secondary to the satisfaction of adults.”

“No amount of happy children brought up in SSM’s could make up for the threat to children of their being legally deprived of their natural fathers and mothers.”

“Although Yes supporters deny any connection between issues like adoption and surrogacy with the SSM amendment, John Waters in ‘The danger lurking under surface of the referendum: Marriage and adoption rights for same-sex couples involves discrimination against children and existing parents,’ (Sunday Independent, 29/3/15), pointed out how that amendment, bolstered by the Constitutional articles defending OSM, will reap the benefit of the Children and Family Relationships Act 2015 (C&FR).”

“He notes that denying the connection between the SSM and C&FR is so fatuous as to be transparent to a child of eight. Any individual change in the constitutional treatment of marriage and family is likely to have implications for the future interpretation of all other such provisions.”

“Therefore, in considering the SSM amendment, the voter needs to contemplate implications arising from the inter-working of the amendment with other family-related constitutional provisions, as well as the C&FR Bill and no less than 18 other Acts of the Oireachtas mentioned in its text.”

“If there is no connection between the C&FR Bill and the SSM amendment, why was it necessary to introduce the bill before the referendum? The reason is clear: the Government wishes to deny the people the right to decide on the question of gay marriage and adoption together, rendering the more contentious issue of same sex adoption a fait accompli and confining the referendum to the question of gay marriage alone.”