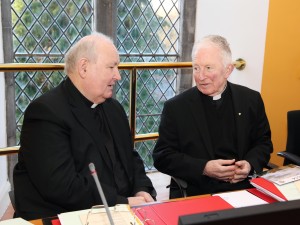 The first meeting between representatives of the Irish hierarchy and the Association of Catholic Priests took place earlier this week during which the crisis in vocations was discussed.

Bishop Philip Boyce of Raphoe, Bishop Martin Drennan of Galway and Bishop Donal McKeown of Derry met with Frs Brendan Hoban of Killala, Dermot Lane of Dublin, Gerry Alwill of Kilmore and Sean McDonagh of the Columban order on Wednesday.

Early in 2013, the leadership of the ACP wrote to the Irish bishops requesting a meeting with them in order to discuss how to deal with the challenges faced by Irish Catholicism today.

According to the ACP, that request was turned down, but the bishops suggested that the ACP might meet the priests’ council in each diocese.

About 16 dioceses invited representatives from the ACP to attend such gatherings.

In Wednesday’s meeting, the ACP representatives told the three bishops that the strategy of clustering “is causing real concern among priests”.

“Many priests see it as an attempt to load more work on their shoulders at a time when they are getting older and are less able to cope with an extra load,” the ACP representatives said.

At the meeting, Fr Dermot Lane asked if the people who were designing these clusters were aware that the extra pressure which was being imposed on priests was having a negative impact on their health.

The priests also underlined that, from the point of view of sacramental theology, in a ‘clustering situation’, the priest leading the liturgy would have no real contact with the community where he was celebrating the Eucharist.

“In this context it is hard to see how this pastoral practice can build up the body of Christ in that community,” they stated.

Some of the ACP team claimed that, at its best, clustering is only a short-term solution for a more serious problem evidenced by the fall in number of vocations to the priesthood.

The exchange acknowledged that the situation in the Irish Church will become critical within a decade or two, however, opinions varied as to what might be done.

Bishop Boyce felt that there should be more prayers for vocations and that priests should be ready to recommend the priesthood to young boys.

Fr Brendan Hoban pointed out that there has been a priest in his present parish since the 8th century, but that given the present statistics, he believes he will be that last priest in that parish.

He explained that while at the moment there is a priest in every parish in Killala diocese, within 20 years there will be 7 priests serving 22 parishes spread out over a wide area.

Three ACP proposals were put forward and the bishops were asked to bring them to the Bishops’ Conference with a view to forwarding them to Rome.

The three proposals are ordaining suitable married men (viri probati); inviting priests who left the active ministry to get married to return to ministry at some level. (It was pointed out that in a west of Ireland parish there were 7 former priests, some of whom would be willing to help); the ordination of women to the Diaconate.

The ACP members said solutions to the current crisis could not be accomplished on a male only basis.

During the meeting, the ACP also drew the bishops’ attention to the findings of a new survey which polled Irish priests on the new translation of the missal, which was introduced by Rome in 2012.

Over 60 percent of priests said they were either dissatisfied or very dissatisfied with the missal. Over 80 percent want it revised or replaced. The use of “obscure and sexist language” was “heavily criticised”.

The ACP also told the representatives of the Irish hierarchy that its members were “very unhappy” with the way the Vatican’s watchdog on orthodoxy, the Congregation for the Doctrine of the Faith (CDF), had treated a number of priests in Ireland. These include Fr Tony Flannery and Fr Sean Fagan.