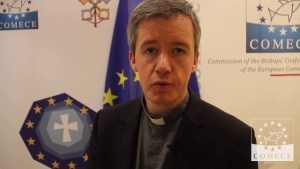 The Associated Press has revealed that the bishops’ conference in Maynooth has hinted that it may be willing to allow a priest who fathers a child remain in ministry under certain circumstances.

AP has seen a letter sent to Vincent Doyle, an Irish psychotherapist whose father was a diocesan priest. Doyle founded Coping International, an online self-help resource that also seeks to educate church leaders about the emotional and psychological problems that sometimes afflict priests’ children.

In the letter, Mgr Gearóid Dullea, executive secretary to the Irish Catholic Bishops’ Conference, told Vincent Doyle, “All reasonable and fair options should be considered as possible, so this neither rules in or rules out various outcomes.”

“It is not possible to rule out, at the beginning, any possible response to these situations which involves a simple default position of insisting that a man ‘leave the priesthood’, or that he automatically be permitted to continue in active ministry,” Mgr Dullea wrote.

The letter to Vincent Doyle, answering questions he sent to the bishops, is dated 10 April 2018.

Vincent Doyle has been lobbying dioceses and religious orders to adopt guidelines drafted by the Irish bishops which emphasise the well-being of the child and the need to respect the mother, rather than focus exclusively on the obligations of the priest.

Mr Doyle has said he knows of several destitute former priests who are struggling to care for their families, as well as mothers who can’t openly press for more financial help because the fathers have chosen to remain priests and keep their families secret.

He praised the Irish bishops for having “opened a new path”.

He also stressed that he is not challenging priestly celibacy, and that any such decisions would be made on a case-by-case basis, in consultation with the priest’s bishop.

In the letter, Mgr Dullea stressed that each situation requires careful consideration.

Last year, the bishops in Ireland said that if a priest fathers a child, the needs of the child should be given first consideration.

The bishops produced a document titled ‘Principles of Responsibility Regarding Priests who Father Children While in Ministry’, which was written in consultation with Vincent Doyle.

The document states that in the case of a child fathered by a Catholic priest, it follows that the priest, as with any new father, should face up to his responsibilities – legal, moral and financial. No priest should walk away from his responsibilities.

In 2015, at their autumn general meeting, the bishops’ conference agreed to pay for therapy for the children of priests through the church-sponsored Towards Healing counselling service.

The decision is believed to have been “the first of its kind in the Church”, according to Vincent Doyle.

Speaking to The Tablet in May 2015, Vincent Doyle explained, “The Irish Catholic bishops have been providing counselling services ‘ad hoc’ through Towards Healing since 2011 to children of Irish Catholic priests and to their mothers since 2013.”

He quoted from a letter sent by the bishops to his organisation in 2014 in which they said they recognised the importance of “adequate care being provided for children born to priests […] and are anxious to ensure that appropriate support is being offered to all children”.

Coping International says it maintains contact with more than 30 children of priests and also some priests.

It works “primarily (at this point) with Irish clientele” but includes the Philippines, Africa and South America, where Irish priests work as missionary priests.