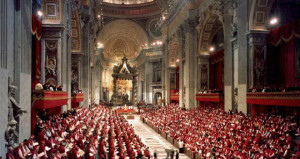 The Irish Bishops Conference has expressed its appreciation of all that Vatican II, which concluded fifty years ago this week, brought to the Church in Ireland.

In a statement on Sunday, the bishops said the Church in Ireland can be grateful for the way the Council opened up new ways of participation in liturgy; new attention to catechesis; new initiatives in ecumenism leading, for instance, to the Inter-Church Meeting.

They also highlighted how it had resulted in the establishment of new realities such as Trócaire, the overseas development agency of the Irish Catholic Church; Mater Dei Institute of Education; the opening of the Catholic Communications Office; the broadcasting of Radharc, the award-winning social justice television series; the Liturgy Centre; new youth initiatives; new pastoral outreach; marriage and family agencies, new movements and communities.

They cited pastoral letters published by the Irish bishops for the benefit of the faithful such as The Work of Justice (1977).

This Tuesday, 8 December, the Church will celebrate the fiftieth anniversary of the conclusion of the Second Vatican Council.

It also coincides with the Feast of the Immaculate Conception of the Blessed Virgin Mary, and with the opening of the Jubilee Year of Mercy called for by Pope Francis.

The bishops have said that as well as giving thanks, the fiftieth anniversary is also a time to review. To consider how the Council been received in Ireland.

“While grateful for many new initiatives, we are all aware of limits and challenges. Some of those on fire with the excitement of the Council have passed away or grown elderly. Today the Church faces new problems unforeseen by Irish bishops in the 1960s. We need to review but without becoming prophets of doom,” they stated on Sunday.

Bishop Michael Smith of Meath was a student in Rome at the time of the Second Vatican Council and acted as a secretary during the Council.

His brother bishops said on Sunday that the task now is to discern what the Spirit today is saying to the Church.

“What matters is that we be attentive to the Spirit who comes to our aid today to interpret and review. If the Council was an event of the Spirit, it is the same Spirit who helps us interpret accurately the Spirit of the Council. To help us tune into what the Spirit is saying, we have been helped by the wonderful encyclical of Pope Francis, Evangelii Gaudium (The Joy of the Gospel) which was published in 2013.”

They said there is a need to go deeper in taking on board what the Council was about, in particular regarding the “secular” dimension of the Church’s Good News.

The Bishops also see the fiftieth anniversary celebration as a time for the Irish Church to recommit itself to renewal.

They said they recognised that there is “something of an ‘ex-culturation’ going on in Ireland, a distancing from the Christian culture or, at least, from the institutional forms of the Church that generated and nourished our culture for centuries”.

“The Second Vatican Council prepared us for that challenge by offering new perspectives on how to be the Church in the modern world. It is the renewal we all need to rediscover.”

Noting that Tuesday also marks the commencement of the special Jubilee Year of Mercy (2015-2016), the Bishops repeated the words of Pope Francis that we should not be robbed of hope and vigour.

“The Spirit who prompted the Council comes to our aid. The celebration of the conclusion of the Second Vatican Council coincides with the opening of the Jubilee Year of Mercy called by Pope Francis.”

“It is a time to take fresh hope that, in God’s mercy, we will be able to do our part in bringing forward what the Spirit opened up for the Church fifty years ago in an event that still provides us with a compass to guide our journey.”

“As we mark the fiftieth anniversary, let us lift up our hearts in gratitude, review and renewal, heeding the invitation of Pope Francis to ‘let God surprise us’.”