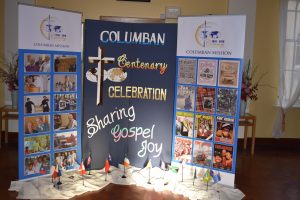 Members of the Irish hierarchy joined the Columban missionaries at Dalgan Park on the Feast of St Columban for the opening ceremony marking the 100th anniversary of the Vatican’s approval of the Society in 1918.

Originally known as the ‘Maynooth Mission to China’, the Missionary Society of St Columban was co-founded in Ireland by Bishop Edward Galvin and Fr John Blowick in the wake of the 1916 Rising.

Archbishops Michael Neary of Tuam and Kieran O’Reilly of Cashel & Emly, as well as Bishops Michael Smith of Meath and Denis Nulty of Kildare & Leighlin were among the scores of priests who concelebrated the Mass on Thursday afternoon.

In his homily, Columban Superior General, Fr Kevin O’Neill, gave thanks for the many blessings the Columbans have received over the past 100 years.

The Columban Centenary Pilgrim Altar Cloth, made up of pieces from each of the countries where Columban missionaries serve, and containing the signatures of those who are part of Columban mission today, covered the Eucharistic table for the celebration in the chapel in Dalgan Park.

“This special Cloth symbolises our communion as missionary disciples ‘sharing gospel joy’, which is the theme of our Centenary. From this chapel, the Centenary Pilgrim Altar Cloth will make its journey to those countries where Columban missionaries serve the people of God. It is fitting that the cloth will start its pilgrimage from Ireland, the birth place of the Society,” Fr O’Neill explained.

He continued, “We give thanks to our founders Frs Edward Galvin and John Blowick for their missionary zeal and vision to found the Society. They met many challenges along the way. Their spirit is with us, supporting us, and guiding us as we face the challenges of our times in our service of the Reign of God.”

The Australian born leader of the Columbans recalled that “Millions of Chinese to be won for Christ!” was the prize that “enchanted a small group of Irish secular priests, who were the prime movers” in initiating what was at first called ‘The Maynooth Mission to China’ and later became the ‘Missionary Society of St Columban’. 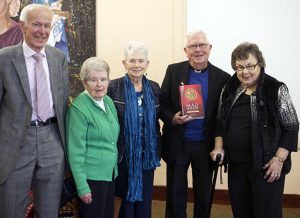 Columban missionary Fr Neil Collins with his family at the launch of his new history of the Missionary Society of St Columban – ‘A Mad Thing To Do’.

In 1911, Canadian Fr John Fraser, who later founded the ‘Scarboro Foreign Mission Society’, a Canadian missionary Society, gave a talk at St Patrick’s College, Maynooth, about his life as a missionary in China.

Fr John Blowick, was a student at the time, and was present at the talk. Three other students, who later also became Columbans, were also present.

Fr Edward Galvin, also a former student at Maynooth, who later became Bishop of the Hanyang Diocese in China, met the same Canadian missionary in New York, a year later, in 1912.

At the time Fr Galvin was a young Irish priest on loan from his home diocese of Cork to the Diocese of Brooklyn. It was after this encounter that Galvin decided to go to China.

Four years later, in 1916, desperate for help, and knowing that he had somehow to find a source of manpower and funds in Ireland to guarantee the future of the project in China, Galvin came back to Ireland. He was put in contact with Fr John Blowick and others, with the idea of setting up a Missionary Society for China.

At that time Fr Blowick held the Junior Chair of Dogmatic Theology at Maynooth. Later that same year, on 10 October 1916, the Bishops of Ireland gave approval for the new missionary endeavour giving permission to make a collection in the country and found a missionary college in Ireland.

On 29 June 1918, two years after the Irish Bishops’ approval, the Maynooth Mission to China was formally erected by Thomas O’Dea, the Bishop of Galway. This is the Foundation Day of the Society and will be one of the key celebration days during the Centenary celebrations in 2018.

The Congregation of the Missionary Sisters of St Columban was established in 1924. The founders of the Congregation were Fr John Blowick and Lady Frances Moloney, who later became Mother Mary Patrick.

“Since that first invitation for the people of Ireland to participate in the new mission enterprise the Society has been forever grateful to the very generous spirit of our benefactors, many of whom are subscribers to the Far East magazine, without whose prayers and support we would not be celebrating our Centenary,” Fr O’Neill said. 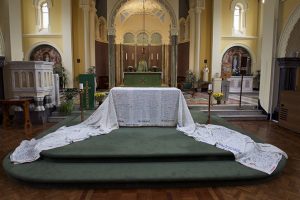 “And since the first hearty welcome into the dioceses across Ireland the Society has been welcomed into numerous dioceses around the world as we helped to establish local churches, fostering in these churches an awareness of their missionary responsibility, principally in the areas of  justice, peace, and care for Creation, while promoting dialogue between Christians and those of other religious traditions, and facilitating interchange between these churches, especially those from which we come and those to which we are sent.”

“We believe the local people themselves have the responsibility for bringing the faith alive in their culture but missionaries have a role to play in setting up the conditions which make such inculturation possible.”

He thanked the many dioceses, parishes and schools in Ireland who have welcomed Columban priests, sisters, lay missionaries and co-workers to promote Columban mission and the Far East magazine, which in January will celebrate 100 years of continuous publication.

“We have been blessed to work with the Columban sisters other mission partners in setting up a Migrant Centre in Dublin and a Mission Centre in the heart of the city.”

He said the ancient Irish missionary spirit, referred to by the Bishops of Ireland when they approved the setting up of the new Society, had its roots in the great missionary monks of Ireland one of whom was St Columban, who is the Patron Saint of the Columban missionaries worldwide.

At the start of Mass, the Irish vice regional director, Fr Padraig O’Donovan recalled how the Irish Mission League, one of the oldest support groups for missionaries, was set up.

He told the congregation of Columbans, family and friends and representatives of other religisu orders, “From the beginning of our Society, Fr John Blowick our co-founder recognised that our Mission would not succeed without the support of the clergy and the people of Ireland. In order to facilitate the work of the Society, the Irish Mission League was established. It is fitting therefore that as we launch our Centenary celebration the very first ledger dated 1918 will be brought to the altar by Fr Sean Brazil. In so doing we honour our benefactors and Irish Mission League members.” 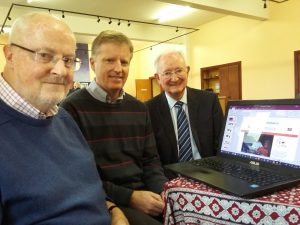 Speaking to CatholicIreland.net after Mass, Archbishop Michael Neary of Tuam said that when he was growing up in the West of Ireland, the Columbans were “our heroes and we looked up to them, we admired their courage, and the way in which they risked everything for the Gospel of Christ – they were prepared to leave home and family and go to areas that were unknown to them, and probably unknown to many of the people they would have left behind in the West of Ireland. They were just wonderful men of great determination who were absolutely convinced of that they were doing.”

Dr Neary admitted that when he was reflecting on his vocation, “the tendency at that time was think of the missions and I was thinking particularly of the Columbans because I was at school in St Jarleth’s in Tuam – there has always been a great link between St Jarleth’s and the Columbans.”

He added, “The roots of the Columban Society would be very firmly located in the homes and the hearts of the people of the West,” he said and explained that Fr John Blowick the co-founder of the Society, came from Belcarragh in Co Mayo, his neighbouring parish.

Bishop Denis Nulty of Kildare & Leighlin told CatholicIreland.net he was delighted to attend the celebration to remember his uncle, Columban missionary, Fr Michael Balfe who was  ordained a priest in 1948 and died in 1973, just before his 25th anniversary of his ordination. Fr Balfe spent time on mission in Japan before ill health forced he to come back to Ireland.

“I am here to remember him and to remember many Columbans, some of them from Kildare and Leighlin diocese and also people like Fr Eamon Sheridan, a Columban priest from my former parish in Drogheda, who is working in Burma now.”

He said Pope Francis was calling all the faithful to be missionary today in spirit. “We all have to be out there – it is not just about going to Japan or China as in the very early days, it is about being missionary at home in our own diocese, in our home, parish and village.”

Bishop Michael Smith paid tribute to some of the “extraordinary and courageous faith acts” that Columbans had done down the years.

“They showed extraordinary courage, extraordinary faith and commitment and that has a lesson to teach as they reflect on this year for the future …. the path of the Lord never runs smooth, there are always moments of testing but when you look back in hindsight you see Providence at work.”

On Thursday, Fr Kevin O’Neill, also launched a new book on the history of the Missionary Society of St Columban. ‘A Mad Thing to Do: A Century of Columban Missions’ by historian Fr Neil Collins SSC is the product of 13 years of research and is the first comprehensive overview of the 100-year history of the Columbans in every region where they set up a mission.

A new website for the Columbans in Ireland www.columbans.ie was also launched by Fr O’Neill.

Other celebrations are taking place in the 15 countries around the world where Columban missionaries currently serve including Myanmar, China, the US, Britain and Australia.