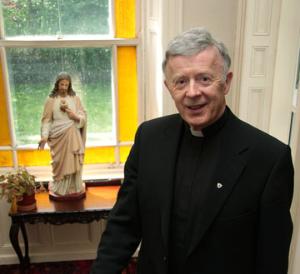 One of the country’s top churchmen has said the Catholic Church’s opposition to the redefinition of marriage is not due to a conservative viewpoint or wilfully inhibiting genuine progress.

In a statement issued this weekend, Archbishop Michael Neary of Tuam stated, “We are not being mean-spirited towards those who have same-sex attractions. On the contrary, we regard marriage as the central and crucial social relationship, which is of natural law and plays an indispensable part in human life.”

He said this was seen nowhere more than in pro-creation and the parenting of children and he added that what happens in marriage serves the common good of both the man and the woman and society itself.

“Our view of Christian marriage, properly explained and understood, is not in any way disrespectful of people who experience same-sex attraction. As a Church we believe every person is equal in the sight of God and should always be treated with love, dignity and respect,” Dr Neary said.

Elsewhere, Archbishop Neary admitted, “There is no denying the fact that marriage faces difficulties throughout the Western world today. These pressures impinge on all, but particularly on children.”

He said the forthcoming referendum was asking people not just to redefine marriage, but also to deprive children of the right to grow up in a family with a mother and a father.

“Following the Referendum on Children’s Rights our laws now enshrine the principle that, in all decisions relating to a child, the welfare of the child must be paramount,” he warned.

“A society that identifies the two parties in marriage as spouse I and spouse II has lost sight of a deep truth of human nature,” he criticised.

He cited Pope Francis who he said has been very clear in saying the family is the foundation of co-existence and a guarantee against social fragmentation.

“Children have a right to grow up in a family with a father and a mother capable of creating a suitable environment for the child’s development and emotional maturity. This referendum is not and should not be about judging the various family types which have always existed as a reality in Ireland.”

“Married parents and single parents deserve as much support as possible as they live out the challenging vocation of parenthood. It is a referendum, however, which is seeking to redefine the very values underpinning our faith-based and cultural understanding of marriage itself, the consequences of which will impact upon our future generations,” he commented.

In saying this, the Archbishop said the Church was not disparaging anyone, nor is it being disrespectful to same-sex relationships.

“Despite what we are led to believe this referendum is not about same-sex relationships or about equality, but about the family.”

Civil partnerships have already been introduced which give same-sex couples the same rights as heterosexual couples in terms of inheritance rights, next-of-kin status, employment, and tax related benefits he highlighted.

Elsewhere in his statement he said we were being told that we must introduce this redefinition of marriage because lots of other countries have. “In fact only one quarter of European countries have done so and none by a popular vote. Indeed, it has been defeated whenever it has been put to the people,” he stated.

The point should be made that many people who are not Catholic and indeed might rarely find themselves aligned with the Church on any subject have expressed misgivings about the purpose of the referendum and the manner in which the Government has prepared for it and in which some sections of the media have conducted and facilitated debate in its regard, Archbishop Neary said. 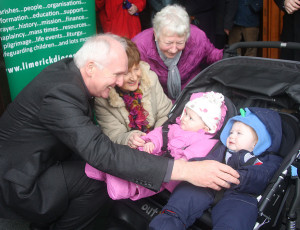 In his statement on Saturday, Bishop Brendan Leahy of Limerick warned the proposed redefinition of marriage in the forthcoming referendum will have a profound impact on the public life and the personal lives of the citizens of our country.

In a letter, including specific reflections on the referendum, distributed in churches across the diocese of Limerick this weekend, Bishop Leahy said that the proposed “major shift” in the Constitution will have implications for the role of marriage and family.

Outlining why he individually, and as a signatory of the statement from the Bishops’ Conference, cannot support this amendment to the Constitution which redefines marriage, Bishop Leahy said that his and others’ concern on the No side of the debate has to do with how the proposed redefinition of marriage will impact on society as a whole, on family life that is already challenged, and in particular on children who have a right, except when this is not possible, to be raised by a mother and father.

Bishop Leahy said that the debate around the referendum is an intense one, to the extent that some are choosing not to engage but he asked the faithful, in reading the letter, to do so carefully, share it with others and talk about it.

It is, he wrote, not easy to dialogue about these issues. “But as the final days wind down to the referendum, let’s try all of us to remain respectful of each other’s view, listening to one another and, no matter what the outcome, be committed to building up a society that is good for families to be brought up in.”

Bishop Leahy said that from listening to the experiences of those in society who are passionate about or have been affected by this issue, he recognises the importance of greater sensitivity to people with a homosexual orientation and the banishing of any homophobic attitudes.

However, reflecting on marriage he said, “Marriage as an institution is under enormous pressure in the Western world. The forthcoming Referendum is a call to Christians to rediscover the deep foundations of marriage based on the union of a man and a woman who are created to complement each other and, where possible, bring new life into the world.

“We (Bishops Conference) have pointed to our concern that should the amendment be passed, it will become increasingly difficult to speak any longer in public about marriage as being between a man and a woman. We also ask, ‘what will we be expected to teach children in school about marriage?  Will those who sincerely continue to believe that marriage is between a man and a woman be forced to act against their conscience?’”

“I invite all people of faith to pray about their decision in the forthcoming Referendum. I also ask that we pray, especially during May, for marriage and the family. It is important to reflect deeply before deciding on an amendment which, if passed, would be a major change in our Constitution and our society. Indeed, Ireland would become the only jurisdiction in the world providing explicitly for same-sex marriage in its Constitution.” 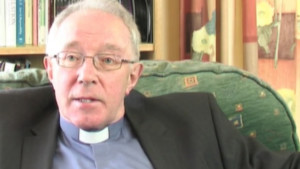 Separately, Bishop John Kirby of Clonfert has said he is conscious that gay and lesbian people have for long felt discriminated against in Ireland, as elsewhere.

“Serious anti-gay bullying is still a factor in many aspects of life including schools and workplaces. There should be zero tolerance for any form of conduct or intimidation of this sort,” he said.

“Society values the complementary roles of mothers and fathers in the generation and upbringing of children,” he said.

He said the coming referendum is not about equality. “The differences between a man and a woman are not accidental to marriage but are fundamentally part of it.”

“Children have a natural right to a mother and a father and this is the best environment for them when it is possible. Clearly there are situations when this is not possible, but that does not change the ideal.”

The bishop of Clonfert added that male-female complementarity is intrinsic to marriage. “It is naturally ordered to sexual union in a faithful committed relationship as a basis for new life.”