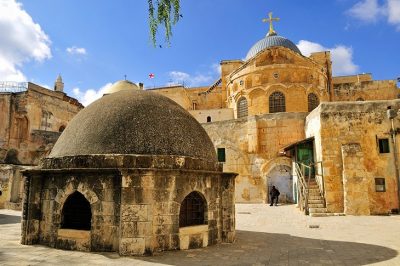 The Catholic Bishops of the Holy Land have condemned intimidation of Christian communities in upper Galilee by Jewish groups linked to the settler movement.

Last Friday, cars were damaged in the town of Jish and offensively anti-Christian slogans in Hebrew were daubed on them.

According to Fides, the latest incident of intimidation is linked to groups that have targeted mosques or Christian places of worship such as Tabgha, Beit Jamal, Latrun and the Dormition in recent years.

These so-called “price tag” attacks are reprisals against Palestinians, Christians and Israeli security forces by radical Israeli settlers over criticism of their settlements.

The spate of “price tag” attacks on Christian monasteries, churches and cemeteries began in February 2012. Since then, elements from groups close to the settler movement have also been carrying out attacks against mosques frequented by the Palestinian Arabs.

On 12 July last, participants in a celebration held in the parish Church of St James in Beit Hanina, a suburb of East Jerusalem, were pelted by tomatoes and other objects by some of the residents of the nearby Jewish settlement of Naveh Yaacov.

In their statement the Catholic Bishops of the Holy Land expressed sadness and sorrow over the criminal acts, which they say go unpunished despite numerous complaints.

In May 2016 the Israeli-based Association of Rabbis for Human Rights also launched a campaign to raise awareness among Israeli political forces regarding the attacks on Christian and Muslim religious targets by extremist gangs.

Earlier this month, patriarchs, bishops and priests representing the various Christian denominations of Jerusalem held a prayer service in protest at the decision of the Israeli Supreme Court to reject an appeal by the Greek Orthodox Patriarchate in relation to the disputed sale of three properties to a group of Jewish settlers.

Patriarch Teofilo gave a press conference in which he reiterated his opposition to initiatives by radical groups that he said end up distorting “the integrity and character of the Christian quarter of Jerusalem”.

“The settlers want to take over our heritage,” he claimed, adding that he hoped that justice and the rule of law would prevail in the face of attempts to dispossess ecclesiastical property.

An international day of prayer for the Christian communities of Jerusalem will be held in September.

At the centre of the dispute is the acquisition of three buildings belonging to the Greek Orthodox Church and now owned – according to the judges – by the Jewish extremist group Ateret Cohanim.

In June the Supreme Court rejected the appeal of the Greek Orthodox Patriarchate of Jerusalem, because the transaction took place through foreign intermediaries and no irregularities were registered.

The facilities are located in the Palestinian area of ​​Jerusalem, occupied and annexed by Israel.

In the past the Christian leaders of the Holy Land have denounced the acquisition campaign by the Jewish association of buildings in the Christian part of the old city.

According to the various churches, there is not only an attack on property rights, but also the “status quo that regulates relations between the different religious communities” and that could in the future become a “threat” to the very survival of Christians.

Ateret Cohanim has already taken over several real estate properties in the area.

The 3 buildings at the centre of the controversy, which has dragged on for 14 years, are located near the Jaffa Gate, one of the transit points most used by local Christians and pilgrims who want to reach the Basilica of the Holy Sepulchre and other holy places.

With this sale, the company became the owner of the majority of the buildings located between the Jaffa Gate and the Arab market.