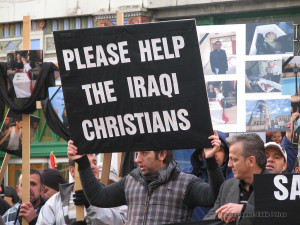 The bishops joined their payers with Pope Francis on Sunday to pray for a renewed global commitment to respect freedom of conscience and religion and for an end to violent conflict and the “brutal persecution” of minorities in the name of religion.

In a statement on Sunday, the Irish Bishops Conference said action is necessary in order to protect young people from being attracted to organisations that seek to impose cultural supremacy by violence.

“Across the world the denial of the freedom of conscience and religion is closely connected to other human rights abuses,” they stated.

“The consequences include violent conflict, loss of life, forced displacement of populations, and the abduction and exploitation of women and children.”

This, they warned, “is a truly global crisis, but it is the poorest communities that remain most at risk.”

Referring to the courageous examples of people willing to pay the ultimate price for their faith, the bishops said the international community “has a moral obligation to defend them, underpinned by the commitments made in the UN Declaration and the International Covenant on Civil and Political Rights.”

In the aftermath of the Second World War, freedom of conscience and religion was recognised as a fundamental human right, enshrined in the UN Declaration of Human Rights (Article 18).

Catholic Social Teaching underlines the importance of this right as “an inalienable requirement of the dignity of the human person” (Compendium of the Social Doctrine of the Church, No. 1738).

In their statement, the IBC said, “In Europe we can contribute to global peace-building efforts by ensuring that our domestic policy and international relations are models of best practice in their respect for freedom of conscience and religion.”

“This requires an approach that goes beyond tolerance, actively embracing the many ways in which religious diversity and multiculturalism enrich our societies.”

Referring to the “brutal persecution” of minorities in the name of religion, they said they had joined with Pope Francis in his prayers for an end to violent conflict.