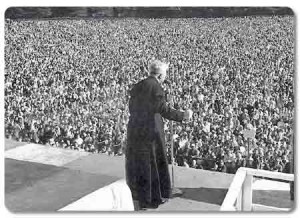 The Irish bishops have designated 6 October next as Rosary Sunday to mark the sixtieth anniversary of the ‘rosary crusade’ which was led by Irish-born Fr Patrick Peyton.

At their three-day summer general meeting in Maynooth this week, the bishops appealed to the faithful to pray the rosary and dedicate it for October’s Extraordinary Synod of Bishops on the Family.

The 6 October is also the Church’s annual Day for Life, and so the bishops also asked that the intentions of the Rosary be offered for this year’s theme, which focuses on protecting and cherishing life.

Fr Peyton led the post-World War II prayer movement called the ‘Family Rosary Crusade’ which he founded in Canada in 1948. He brought the crusade to Ireland during the Marian Year of 1954.

The priest staged massive Rosary rallies in cities around the world and used mass communication, helped by Hollywood celebrities such as Bing Crosby and Gregory Peck, to promote his ministry of binding families through prayer under the Family Rosary.

Fr Peyton was a popular and charismatic figure in Latin America and the Philippines. 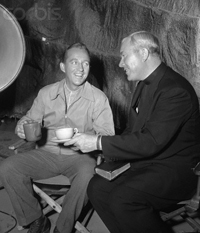 He was born on 9 January 1909 in Attymass in Ballina, which he later left when he was 19, to follow some of his sisters who had emigrated to the US.

He contracted tuberculosis while studying for the priesthood in the US two years before his ordination and he started his Rosary Crusade in thanksgiving to Our Lady for his recovery from that illness.

In 1954, from April to August he visited the dioceses of Tuam, Galway, Clonfert, Achonry, Elphin, Killala, Down and Connor, Meath, Waterford & Lismore, and Ferns.

The twenty-first and final rally was held on Our Lady’s Island, fourteen miles from Wexford town, and it was attended by 40,000 people.

Father Peyton made the famous slogan: ‘The family that prays together stays together’ and also ‘A world at prayer is a world at peace.’