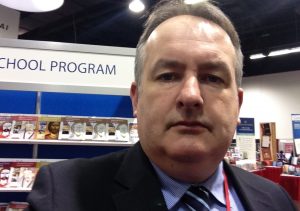 The new director of Veritas Communications, who will replace outgoing director Maura Hyland when she retires next month, has been a member of the company’s senior management team since 2009.

On Tuesday, the President of Veritas Communications, Bishop Brendan Leahy, announced the appointment of Aidan Chester, who has been responsible for the retail, distribution and marketing functions in the company.

A computer science graduate of UCD, he has over 25 years of experience in sales, marketing, operational and IT management.

Prior to joining Veritas in 2009, Aidan Chester was responsible for managing major retail operations, and he held roles with several commercial and book retailers.

He will take up his role on 17 October following the planned retirement of Maura Hyland.

In a statement, Bishop Leahy said he believed Mr Chester’s appointment would “bring many new opportunities for Veritas in the future.”

Maura Hyland was appointed director of Veritas in 2000 and oversaw the expansion of the company in those years, doubling the number of Veritas shops around the country from six to 12, including opening new shops in Blanchardstown, Naas, Monaghan, and Derry.

The 66 year old is a former primary school teacher.

Veritas’ origins lie in the Catholic Truth Society of Ireland, which was founded in 1899 to publish and distribute a range of religious material.

In 1928, Veritas branched out into retail and opened a store on Lower Abbey Street, Dublin, where it sold religious artefacts and pamphlets published by the Catholic Truth Society.

The company expanded by distributing pamphlets published in England and the United States.

In the 1930s and 1940s, Veritas supplied church vestments, as well as engaging in the travel business, by organising trips to Lourdes, Fatima and Knock.

In the 1960s, the Communications Centre was founded in Booterstown by the Irish Catholic Bishops’ Conference, under the directorship of Fr Joe Dunn.

It came about as a response to changes and developments in the media and to help meet the information needs of the faithful.

Veritas Publications came into existence in 1969, its first title being Patrick in His Own Words by Bishop Joseph Duffy.

Between 1979 and 1988, retail outlets were opened in Cork, Ennis, Sligo, Letterkenny and Stillorgan in south Dublin.

The first Veritas store in Northern Ireland was opened in Derry in November 2001.

Since 2004, Veritas has opened a store in the Blanchardstown Centre in west Dublin, one in Monaghan incorporating a Christian Art Gallery, and stores in Naas in Co Kildare and in Newry, Co Down.