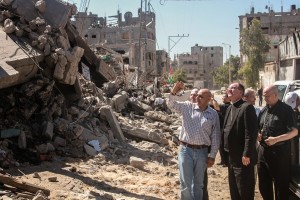 Sixteen bishops from Europe and the US who undertook a fact-finding mission in Gaza have called for an end to Israel’s blockade of the territory and greater efforts to deal with the poverty made worse by last year’s conflict.

This was the Holy Land Coordination group’s first visit to Gaza since the violence in 2014 which killed 2,000 Palestinians and 70 Israelis.

In a statement at the conclusion of their visit, the delegation which included two Irish bishops called on officials to be creative, to take new approaches, to build bridges, not walls.

“We came to pray with and support the Christian community and to promote peace and human dignity in this divided land,” they explained.

They said they had witnessed the tragic consequences of the failure of both local and international politicians to advance peace.

“Human dignity is given by God and is absolute. The ongoing conflict assaults the dignity of both Palestinians and Israelis, but in a particular way our commitment to the poor calls us to lift up the suffering people in Gaza.”

“A year ago, we called Gaza ‘a man-made disaster, a shocking scandal, an injustice that cries out to the human community for a resolution.’ In the wake of the terrible destruction caused by last year’s war, our presence reminded the small Christian community that they are not forgotten.”

The bishops said many tens of thousands of families in Gaza lack adequate shelter. They related that in the recent freezing weather, at least two infants died of exposure.

“The continuing blockade dramatically impedes rebuilding and contributes to desperation that undermines Israelis’ legitimate hope for security. It also creates intolerable levels of unemployment and pushes ordinary people into deeper poverty,” they stated.

The episcopal delegation said that despite the devastation, appalling scenes of destruction they saw, and the fears of another war they heard, hope is alive in Gaza.

“We saw families resolutely rebuilding their lives. We witnessed a small Christian community that has enormous faith. We admired the tenacity of many volunteers. We visited Holy Family School where Muslims and Christians study and play together in harmony. We met with the Holy Rosary Sisters, who true to their co-foundress Marie-Alphonsine, to be canonised a saint this year by Pope Francis, exercise a prophetic ministry of education. We celebrated Mass with the Sisters of the Bethlehem Carmel. Their foundress Mariam Baouardy, another Palestinian whose life testifies to the holiness that still emanates from this Land, also will be canonised.”

They called on political leaders to defend the human dignity of the people in Gaza.

“One student poignantly told us that he received an email during the war asking if he needed food or clothing or shelter. Without bitterness, he replied that what he needed was dignity. People of good will on both sides of the conflict want the same thing, a dignified life worthy of the human person.”

The bishops said that in the coming months they will continue to oppose the building of the proposed wall in the Cremisan Valley, which would result in the loss of the lands and livelihoods of many Christian families.

“This situation is tragically a microcosm of the reality of the land issue. We will also continue to oppose expansion of the settlement program, illegal under international law, which we witnessed acutely in Hebron. Its impact on the freedom of movement of Palestinians and the confiscation of lands is simply unjust.”

“We must humanise the conflict by fostering more interaction between Israelis and Palestinians. Peace will only come when all parties respect the fact that the Holy Land is sacred to three faiths and home to two peoples,” the bishops stated.

They recalled Pope Francis’ recent statement to the Diplomatic Corps in which the Pontiff said his thoughts turn above all to the Middle East, beginning with the beloved land of Jesus which he had the joy of visiting last May, and for whose peace the Church constantly prays.

“We did this with extraordinary intensity, together with the then President of Israel, Shimon Peres, and the President of Palestine, Mahmoud Abbas, inspired by a confident hope that negotiations between the two parties will once more resume, for the sake of ending violence and reaching a solution which can enable Palestinians and Israelis alike to live at last in peace within clearly established and internationally recognized borders, thus implementing the ‘two state solution’,” the Pope said.

The path to peace demands respect for the human rights of both Israelis and Palestinians, the sixteen bishops stated and added, “Our prayer nurtures the hope that makes peace possible. We call on all Christians to pray for the Jews, Christians and Muslims of this Land we call Holy.”

Last Sunday the delegation of bishops was split up when it tried to enter Gaza at the Erez crossing.

Despite assurances from the Israeli authorities that the bishops would be allowed to travel into Gaza, only three were initially allowed in, with the others being forced to remain in Israel.

However, after waiting eight hours they were eventually let through.

Bishop Declan Lang of Clifton told the Tablet, “Being held up for eight hours at the Erez crossing was difficult and disappointing as we were unable to celebrate Mass with the people in the Holy Family parish in Gaza. It did, at the same time, give us a small insight into the experiences of the few Gazans who are allowed to come in and out of Gaza.”

Since 1998, the Co-ordination of Episcopal Conferences in Support of the Church of the Holy Land has met at the invitation of the Assembly of Catholic Ordinaries of the Holy Land. Expressly mandated by the Holy See, the Holy Land Co-ordination meets every January in the Holy Land, focusing on prayer, pilgrimage and persuasion with the aim of acting in solidarity with the Christian community as it experiences intense political and social-economic pressure.

The following bishops made up this year’s delegation