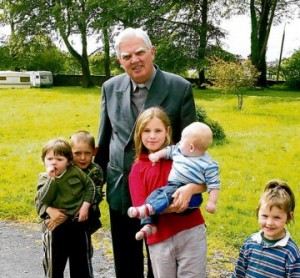 The retired Bishop of Killaloe, Bishop Willie Walsh, will launch his memoirs in his native town of Roscrea in Co Tipperary next week.

The book which is titled ‘No Crusader – Willie Walsh’ was inspired by a near death experience the Bishop had in 2013.

This prompted him to reflect ever more deeply on his own life, his faith and his ministry for over fifty years.

Speaking about the publication of his memoirs on local radio, Bishop Walsh said that he “had no intention of ever writing a book”.

He added, “Over the past 15 or 20 years I have written a certain amount for religious magazines. I don’t see myself as a literary person. It is said that everybody has a story to tell but I didn’t see my story as being significant.”

“When I retired I was approached by a number of publishing companies but I told them that I had no intention of publishing a book. In November 2013 I had a very close to death experience, the reality is that I nearly died. It took me up to five months to get over that and some of that time was the blackest of my life. That forced me to reflect on my own beliefs.”

“That was the turning point, the first thing that I did was to write about those experiences and it sort of flowed from there.”

A native of Roscrea Bishop Walsh was ordained in 1959 in Rome at the age of 24. After ordination he completed his studies in Canon Law at the Pontifical Lateran University in Rome.

On his return to Ireland he taught for a year at Coláiste Einde, Galway and joined the staff of St Flannan’s College, Ennis in 1963.

In 1988, he was appointed curate at Ennis Cathedral and became administrator there in 1990.

He became Bishop of Killaloe in 1995 after a short term as Coadjutor bishop and served until 2010 when he was succeeded by Bishop Kieran O’Reilly.

By his own admission, Willie Walsh would be more comfortable wielding a hurley than a pen. In the book, which combines memoir with deep personal reflection, his conversational style guides the reader through the story of an ordinary man from an ordinary family.

According to the publishers, Columba Press, this is no rose-tinted view of Ireland, the Catholic Church or the world.

“Willie Walsh is not afraid to ask the difficult questions – questions that will need to be faced by the institutional Church if it is to try and regain the credibility lost in the late twentieth and early twenty-first century.”

Neither does he shy away from the difficult questions of faith and what it means to be a Catholic in an increasingly secular Ireland.

The extent to which faith is questioned through Bishop Walsh’s personal journey might surprise some.