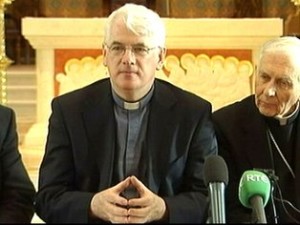 The Bishop of Down & Connor has paid tribute to the former SDLP MP and founder of the party, Eddie McGrady, whose funeral took place on Thursday in Downpatrick.

Speaking of his sadness on learning of Mr McGrady’s death after “heroically facing a long period of illness”, Bishop Noel Treanor paid tribute to his “immense contribution” to the political arena.

The Bishop said this was manifest in his role as a founding member of the SDLP espousing the highest ideals and virtues of constitutional democracy, as well as in his tireless capacity to reach out across his South Down constituency to all those in need.

“Motivated by faith, strengthened by the values of integrity, courage and justice and astutely attentive to social and community concerns, he was a popular politician who engaged effectively with those he met in his public office,” the Bishop said.

He offered his condolences to Eddie McGrady’s family – his three children Paula, Jerome and Conaill, his sister Maire, his brother Malachy as well as to his friends and colleagues in the SDLP.

Fr Fergal McGrady, a nephew of the politician’s, was the main celebrant at the funeral at St Patrick’s Church in Downpatrick.

In his homily, he described his uncle as, “A Christian, a democrat and a patriotic Irishman, he was, in the eyes of fair-minded observers, critics and supporters alike, a gentleman of honour.”

Fr McGrady related that his uncle was an accountant by profession and that he had entered public life in the 1960s, at a time when many of a similar background shied away from it.

“His conscience and faith-informed lay calling drove him to strive for the betterment of the people he lived amongst,” he said.

He commented that Eddie McGrady was “in the main more interested in bettering the lot of people socially and materially than in any aspect of political belief. He was a unifier by nature; words carefully chosen, measured, conciliatory, a moderating influence. He espoused Christian and family values.”

Nor was he afraid to take on ‘big-business’ interests, tackling, confronting environmental matters, which he considered had a detrimental effect on the community and he referred to Eddie McGrady’s opposition to the siting of nuclear waste disposal at Sellafield in Cumbria.

“Eddie McGrady came from a strong sacerdotal family. He was a good brother to his late brother priest Fr Sylvester and a good uncle to his two priest nephews”, Fr McGrady said and he thanked Bishop Anthony Farquhar for his presence at the funeral.