Home > Featured > Bishop recalls arrival of Dominicans in Sligo in 1252

Bishop recalls arrival of Dominicans in Sligo in 1252 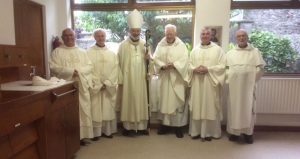 Just forty years after the Dominican order was founded 800 years ago in 2016, they arrived in Sligo in 1252.

At a Mass to commemorate the Order of Preachers’ 800th anniversary, Bishop Kevin Doran of Elphin led celebrations at the Dominican priory in Sligo on Sunday.

In his homily, he described the Dominican presence in Sligo as “an integral part of the life of the city, in good times and bad, down through all those years”.

Recalling the history of the Order over eight centuries, he said they came into being in a world which, in many ways, was just as confused and just as violent as our own world today.

St Dominic left his own home and his own country, eight hundred years ago, to preach God’s word.

He settled in Toulouse and gathered some disciples around him, who were soon recognised by Rome as the Order of Preachers.

Noting that in Dominic’s day, people went to war about religion, Bishop Doran said that some years ago, he had spent a few months on sabbatical in the South West of France in a region associated with the Cathars – a Christian sect who rejected the goodness of the material world. For them the only good was to be found in the mind and the soul.

For the most part they lived good and disciplined lives. They were hounded and besieged and eventually many of them were put to death because they would not conform.

“Dominic and his disciples were committed witnesses to the truth of God’s love, but Dominic didn’t believe that the truth could be forced on people. People needed to be persuaded by reason and by the witness of a holy life.”

Referring to Sunday’s second reading, in which St Paul speaks about Abraham and Sarah, who lived together in the wilderness with their sheep.

They had no children when God first made himself known to them. They took God at his word and that trust allowed them to set out on a journey without knowing for sure where it might lead them.

Most of their hopes were only fulfilled in the generations who came after them, “their children and their children’s children”.

“For St Paul, they are the classic people of faith,” the Bishop of Elphin said.

He challenged the congregation – What is faith? Would you describe yourself as a person of faith? Is faith the same as religion?

“Religion,” he said, “has to do with the practices we engage in like going to Mass, saying the rosary, going to the holy well, going on pilgrimage to Lourdes. These practices help to nourish our faith.”

As the gospel reminds us: “where your treasure is, there your heart will be”.

Dominic and his companions recognised the goodness of creation, but their “treasure” was not in material comforts. They devoted their energy to study and prayer so that they would be better prepared to engage in dialogue with unbelievers.

One of the mottos of the Dominicans, as you possibly know, is ‘Veritas’, which means truth. It was their faith in Jesus Christ and in the truth of his word, that made it possible for them to set out, not knowing what might lie ahead of them.

The Dominicans became associated with some of the first and greatest universities in Europe, and counted among their number great persuaders like:

In our own times, Bishop Doran emphasised, there are all sorts of opinions on the go.

“In previous generations, there was a tendency to assume that everyone believed the same thing. Perhaps that wasn’t a very healthy situation, because it was sometimes more about conformism than about a personal relationship with God. It was too easy for people to take faith for granted. Faith seems to be stronger when it is tested.”

So today, we have a different mix. Alongside people of faith, who express their faith in religious practice, we have people who have rejected organised religion but who live the values of the Gospel in the work of justice, and then we have people who are outwardly religious but who have little or no faith in God or in their fellow human beings.

As a person of faith, how do you continue to be a witness to the truth of God’s love in a world that sometimes doesn’t want to know, Dr Doran challenged.

He added that many people, these days, prefer to keep their heads down and almost apologise for what they believe, in case it might offend others.

Others want to gather the wagons in a circle and hope that we can survive “the next attack”.

Some, in a misguided attempt to defend the faith, would seem ready to go back to the medieval practice of burning heretics at the stake.

“Those who follow the inspiration of St Dominic would continue to bear witness to the truth in their words and actions, without apologising for it, but always loving and respecting those who do not share their faith.”