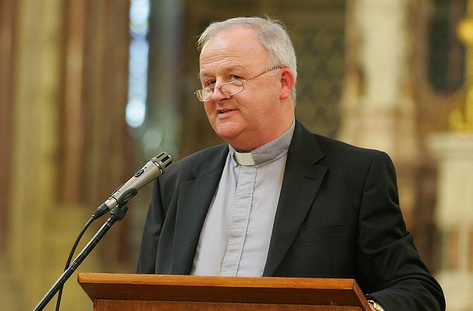 Bishop Brendan Kelly, Chair of the Council for Education of the Irish Catholic Bishops’ Conference, has paid tribute to education pioneer Bro Declan Duffy who was actively involved in Minister Donogh O’Malley’s ‘free education’ movement in the 1960s.

Deciding to become a Brother, he completed his degree at University College Dublin and was a member of the first team of teachers when the Marist Brothers, on the invitation of the then Archbishop of Dublin John Charles McQuaid, opened Marian College in Ballsbridge, Dublin, on 8 September 1954.

Bro Declan’s leadership skills and business acumen were quickly identified and he was appointed principal of the college at the age of 31 years in 1959.

He served two six-year terms as principal and during his time at the school he added the ‘Prep’ block and the third storey on the main building.

He also entered a partnership with Dublin Corporation to build the first indoor swimming pool built in the 20th century in Dublin. The pool, which opened in 1964, continues to serve the school and local community to this day.

During his time as principal, Bro Declan inaugurated an English Language Summer School which thrived until the early 2000s and which became the model for many other such schools in the 1970s and 1980s.

“Brother Declan was also very actively involved in Minister Donogh O’Malley’s ‘free education’ movement and in 1969 the three Marist schools in Ireland, along with 90% of the voluntary schools, joined the ‘free education’ system,” Bishop Kelly noted.

When Bro Declan finished as principal of Marian College in 1971, he became provincial of the Marist Brothers in Ireland.

He was also elected Chairman of the Education Commission of the Conference of Major Religious Superiors.

As such he was central to the formation of the Joint Managerial Body (JMB) and was a pioneer of the Community School movement, as evidenced by the fact that the Marist Brothers became Trustees of the first community school at Tallaght in Dublin.

In 1977, Bro Declan was appointed as Secretary General of the JMB. He served with distinction in that role from 1977 until his retirement in 1996.

He was involved in many negotiations with the Department of Education and the ASTI union over that long period of time.

“Bro Declan was a constant innovator, a great believer in life-long education, a great supporter of teaching and teachers and particularly of the involvement of lay-people in the management and leadership of schools,” Bishop Kelly said.

“Unfortunately, although Brother Declan tried to continue to work in education after his retirement, he began to suffer memory loss and although he continued to live at Marian College until very recently, he died after a short illness on Easter Tuesday 22 April last, having spent almost sixty years at the College he loved.”

The funeral Mass for Bro Declan Duffy will take place in Star of the Sea Church, Sandymount, Dublin at 12 noon Friday, 25 April, and burial will take place at the Marist Plot in Athlone, Co Westmeath, at 3.30pm.