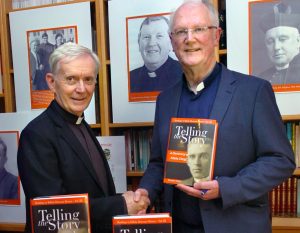 Fr Brendan Hoban pictured at the launch of his book ‘Telling The Story, A Dictionary of Killala Clergy’ in the Newman Institute with Bishop of Killala Most Rev Dr John Fleming. Pictures Henry Wills.

Launching Fr Hoban’s new book ‘Telling the Story’ at the Newman Institute in Ballina, the Bishop of Killala described the priest’s contribution to public debate and intellectual life as “enormous”.

Elsewhere in his address, Bishop Fleming stated, “At a time when the secular state is flexing its muscle more than ever before, when the Church still reels from recent scandals and tries to adjust to a new role in Irish society, when priests are no longer held in the same regard as in the past, Brendan flies the flag for a Church which is still capable of contributing to debate in the public forum, which is deeply committed to pastoral care and which is open to looking at its own life, as well as challenging its leadership.”

He noted that during the past twenty-one years, Fr Hoban has written sixteen books which in total run to 4,971 pages of written text.

“Add to this his weekly column in The Western People, his weekly programme, Faith Alive, on Mid-west Radio, the fact that he was also the first editor of our diocesan paper, ‘The Vineyard’ and you will get some idea of his prodigious output.”

“You may not always agree with what he says but all of us respect the fact that he has the courage to say it. Personally, I have no idea where he gets the time and the energy to do all that he does.”

Fr Hoban’s new book, ‘Telling the Story, A Dictionary of Killala Clergy’ is the third book of a three-volume series of Readings in Killala Diocesan History by him.

He was joined by his family, colleagues, parishioners and friends to celebrate the significant milestone for Killala diocesan history.

The parish priest is well known as a commentator on current church affairs as well as his commitment to the implementation of the reforms of Vatican II at all levels in church.

However, less well known is his interest in history as demonstrated with the publication of his latest book.

In his address, Bishop Fleming spoke about the contribution and tradition of Irish priest historians and singled out Frs Begley in Limerick, Cogan in Meath, Corrigan in Ossory, Swords in Achonry, D’Alton in Tuam and Maguire in Raphoe.

These are the names of some distinguished Irish priest historians from the nineteenth and twentieth centuries. These men did two things in particular; they made a major contribution to the study of Irish history, particularly in their own diocese. They also gave a recognition and a respect to Irish secular priests in the intellectual circles of those centuries.

He said he could now add Hoban in Killala to this list of illustrious Irish priest historians.

According to the Bishop, the Irish priest historian had three particular characteristics: 1. As a historian he was generally self-taught. 2. Through his own initiative he acquired the ability to access the sources for his research and 3. He was a working priest in a parish and remained faithful to that work for his entire lifetime.

His interest in history was, therefore, personal, local and a hobby, for want of a better word.

“Brendan ticks all the boxes and characteristics of the group which I have described. While he studied under the distinguished Irish historian, the late Cardinal Tomás Ó Fiaich, Brendan is largely self-taught as a historian.”

“Through his own initiative and ingenuity, he achieved a unique command of the sources for the history of this diocese. Indeed, in all his works, his footnotes are as rich a source of information as the pages of the text itself. Thirdly, of course, he continues to work as a parish priest in this diocese.”

He said Fr Hoban had done “an enormous service to the Diocese of Killala. Warts and all, he has told its story. But perhaps, the equally important contribution which he makes is to the intellectual standing in which he is held in our country.”

In his address at the launch, Fr Hoban paid tribute to the late Cardinal Tomás Ó Fiaich who was Professor of Modern History when he went to Maynooth 50 years ago this September.

“It was a joy studying under him. I remember doing my history thesis on Bishop Dominick Bellew who was bishop of Killala from 1780 to 1813 and, almost half a century later, I was able to use some of my research in Tracing the Stem, Killala Bishops.”

Referring to the journey he embarked on 50 years ago this September when he went to Maynooth, Fr Hoban said “in many ways it’s been a roller-coaster time . . . in many ways too it’s been quite unbelievable”.

“What a lucky generation we’ve been to have lived through such a vibrant and exciting time for our country, for our world and for our Church.”

“Yes, there have been problems, and I don’t want to brush them aside, but remembering where we’ve come from, who would have believed where we’ve got to?”

He recalled how Michael Munnelly was born in Knockmoyle in Moygownagh parish in 1816 200 years ago this year and he was ordained in Maynooth in 1848.

He was appointed as a curate in Kilmore Erris when the Famine was at its height. People were dying in hundreds around him, most of them living in one-roomed cabins with no chimney and no window . . .and Munnelly later told how he went around from cabin to cabin, ministering to people who were dying of starvation, many of whom had the fever . . . Munnelly wondered afterwards how he had escaped the cholera . . .

“The Mullet and Killala diocese and Ireland are light years away from those days . . . and when we talk about the trials of austerity (and it’s right that we should) we often have no idea of where we came from . . . “

Copies of Fr Hoban’s book are available in The Pastoral Centre, Ballina, Eason’s Ballina, Belmullet Parish Office, and locally in parishes throughout the diocese.