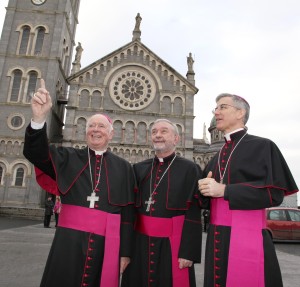 Archbishop Dermot Clifford with the new Archbishop of Cashel and Emly Bishop Kieran O’Reilly SMA (centre) and the Papal Nuncio Archbishop Charles Brown outside the Cathedral of the Assumption in Thurles Co Tipperary after the announcement on Saturday morning. (22.11.14). Pic John Mc Elroy.

The announcement was made on Saturday morning in the Vatican and in Ireland.

Bishop Kieran is currently serving as Bishop of the Diocese of Killaloe and as Episcopal Secretary to the Irish Episcopal Conference.

Responding to the news, the Primate of All Ireland, Archbishop Eamon Martin congratulated Bishop O’Reilly on behalf of the Irish Episcopal Conference.

In his statement, Archbishop Martin said, “I have known Archbishop Kieran since he became Bishop of Killaloe in 2010.  In that time, like the people of Killaloe, I have come to know the warmth of his personality and his gentleness and pastoral sensitivity.”

“As a new bishop myself, I have appreciated his wise counsel on many matters.”

The Primate said Archbishop elect O’Reilly brings a perspective to the table of the Irish Episcopal Conference which is drawn from his wide experience of mission in Liberia and Nigeria.

“Conscious of Pope Francis’ dream, mentioned in his Apostolic Exhortation The Joy of the Gospel, of a ‘missionary option’ to inspire everything we do in the Church, I have no doubt that Archbishop Kieran will continue to make an invaluable contribution to the renewal and mission of the Church in Ireland,” Dr Martin said.

He also thanked the members of the Society of African Missions, and in particular the Irish Provincial, Fr Michael McCabe, for ‘giving’ Archbishop Kieran to us to serve as a bishop.

“This is another significant day for the Society. It is also a very special day for Archbishop Kieran’s family and I wish to say a particular word of thanks to his mother Theresa, his brother Joseph and his sisters, Therese and Deirdre for all their love and support throughout Archbishop Kieran’s life and ministry.”

He added, “We also remember in a special way Archbishop Kieran’s late father Sean, and his deceased brother Sean Óg, at this time.”

On 16 May 2010 Pope Emeritus Benedict XVI announced Father Kieran O’Reilly SMA as Bishop of Killaloe to succeed Bishop William Walsh who had retired on completing his seventy-fifth year in accordance with canon 401.1 of the Code of Canon Law.

Elsewhere in his statement, Archbishop Martin paid tribute to Archbishop Dermot Clifford’s ministry in this the fiftieth anniversary year of his priestly ordination.

“Archbishop Clifford is well known locally and nationally for his qualities of faith leadership, good humour, love of the environment, and devotion to our national games,” he said. 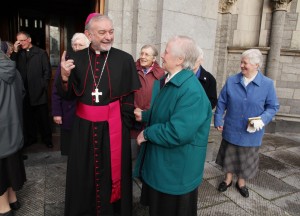 Bishop Kieran O’Reilly SMA who will be the new Archbishop of Cashel and Emly greeting people outside the Cathedral of the Assumption in Thurles Co Tipperary after the announcement of his appointment on Saturday morning. Pic John Mc Elroy.

Archbishop Martin said that over these years Archbishop Clifford has offered the Irish Episcopal Conference the benefit of his wisdom and his particular expertise in research and development.

He said that since 1986 Dr Clifford has made a significant contribution to the lives of the faithful in his own diocese, as well as in more recent times as Apostolic Administrator in the Diocese of Cloyne.

“For this, the Church in Ireland, and indeed the Universal Church, owe him a great debt of gratitude for his tireless and selfless service during the most challenging of times,” he said.

In his statement on Saturday morning at the Cathedral of the Assumption in Thurles, Archbishop Dermot Clifford said that over the years he had always prayed that he would be well enough to ordain his successor when he reached retirement age.

“As it turns out, I now find that I have already ordained him four years ago in Ennis!”

“I recall that I anointed him liberally with the Oil of Chrism, without realising that I was anointing him for two dioceses!”

“I have been privileged to be working with him over the past four years as a Bishop of the Munster Province and as a colleague and friend in the Bishops’ Conference. We have worked together in a number of commissions and he is now the Episcopal Secretary to the Conference.”

“That he is a scholar I learned from others, that he is a gentleman I have found out for myself.”

Archbishop Clifford said that in official terms, Bishop Kieran is being translated from Killaloe to Cashel & Emly.

“I recall the award winning film of some years ago, “Lost in Translation”. Bishop Kieran has been translated several times in his life. But he has certainly never been lost in translation. In fact, he has gained each time he was moved and, not only that, he has grown.”

“He went from Ireland to Liberia as a missionary, then back to Rome for Scripture Studies. Next he was moved to Ibadan, Nigeria to teach in the seminary. He returned to Rome to become Superior General of the Society of the African Missions and was re-elected after six years, a sign of his popularity among his fellow African Missionaries worldwide. From there he came to Killaloe in 2010 as Bishop. He has wide experience of the Church on the missions, in Rome and in Ireland.”

However, he also sounded a note of caution, stating that as archbishop, Dr O’Reilly “will have no shortage of challenges in his new role.”

“The Apostolic Visitator who came here in 2011, Archbishop Thomas Collins of Toronto, observed in his Report that ‘while there were relatively few cases of child clerical abuse in Cashel and Emly and that they had all been properly handled, this work has required great effort leaving less energy for the work of evangelisation so essential in such a secular atmosphere.'”

He said it was therefore necessary to re-energise the traditional spirit of faith of the Christian community and to reactivate programmes of renewal…as soon as possible.

Archbishop Clifford said he believed that Bishop Kieran is the ideal man to work with priests and people in the work of evangelisation and spreading the Good News.

He added that the area of marriage and the family is of renewed importance especially in view of the recent Synod of Bishops in Rome and the next one in 2015.

“I believe Bishop Kieran is the ideal man to work with priests and people in the work of evangelisation and spreading the Good News. Of course, the area of marriage and the family is of renewed importance especially in view of the recent Synod of Bishops in Rome and the next one in 2015.”

He said he looked forward “very much” to his presence in Thurles when he is installed in the New Year.

Archbishop Clifford concluded by saying that his motto will be drawn from Cardinal Newman: “Ever ready, never in the way”.

Bishop O’Reilly was born in Cork on 8 August 1952 to Seán and Theresa O’Reilly.

Educated at Scoil Chríost Rí and Coláiste Chríost Rí, he entered the Society of African Missions in Wilton, Cork in 1970.

He was ordained for the Society on 17 June 1978 and served in Liberia for two years in the Archdiocese of Monrovia before studying for a licentiate in Sacred Scripture at the Pontifical Biblical Institute in Rome.

From 1984 to 1989 he lectured in Scripture at the Major Seminary of Saints Peter and Paul, in Ibadan, Nigeria.

From 1989 – 2010 he served on the Irish and International Councils of the Society of African Missions.  In May 2010 he was appointed by Pope Emeritus Benedict XVI as Bishop of Killaloe.