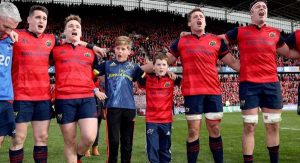 The Bishop of Limerick, Dr Brendan Leahy, has described as “moving and inspirational” the gesture by the eleven-year-old son of Anthony Foley in asking people to go to Mass and light candles for deceased loved ones over the next eight Sundays.

Former Shannon, Munster and Ireland No. 8, Anthony ‘Axel’ Foley, who was also Munster Rugby’s Head Coach, died suddenly on Sunday 16 October, hours before Munster were due to play Racing in their opening Champions Cup tie.

The tie was postponed as a mark of respect to Anthony Foley, who would have celebrated his 43rd birthday on Sunday 30 October. Anthony Foley’s two sons, Tony (11) and Dan (8), moved many around the world when they joined the Munster huddle after the side’s recent game against Glasgow Warriors in the Champions Cup at Thomond Park in Limerick.

Endorsing the #8masses4no8 Facebook campaign launched this week by Tony Foley and his family, Bishop Leahy said it was a deeply touching and selfless gesture at a very tragic time for the Foley and Hogan families.

“This is both moving and inspirational. The Foley and Hogan families have found themselves in one of the worst places imaginable. But yet this young man has been moved by the support they have received to, in turn, think of others. Like everyone, I was very struck last week by his mother Olive’s strength in the face of this tragedy, not least in her eulogy at the Funeral Mass on Saturday.

“She is clearly a woman of deep faith and it will help her through this very difficult time. That faith is clearly passing off onto her sons. The beauty of this Facebook campaign is the courage that the family is showing in acknowledging they are not on their own, that there are many, many like them who have lost loved ones also.”

He added, “The campaign starts next Sunday, which is on his Dad’s birthday and that adds even more poignancy to it. But we are also moving into November, which is the month when we remember those who have gone before us. Tony’s call is, therefore, hugely timely as while people never forget those who are gone, Mass is the greatest prayer we have to remember them with. This really is a powerful movement that this young man has started and the response has been huge by all accounts. It really is a movement of love and remembering inspired by an 11 year old boy. He really is a credit to his father and mother.”

The Facebook site – Axel Foley Memorial – was launched on Monday last and is already attracting huge attention. In the campaign – #8masses4no8 – Tony Foley is asking people to go to Mass for the next eight Sundays, poignantly starting this coming Sunday, which is his father’s birthday. The page explains that Tony and his family have been overwhelmed by the support they have received since his dad, Anthony ‘Axel’ Foley, passed away.

The Facebook page states that “Tony has been busy thinking of a tribute to his Dad and has asked that this page be set up in his memory. He wants to use it to ask people, who want to show their support, to attend Mass on each of the next 8 Sundays to pray for people who have died and while there to offer a prayer for his Dad also.” It continues: “The Number 8 is, of course, a special number for Tony and his family but the 8 Sundays also bring us up to that special family time of year, Christmas.”

It continues: “So, Tony has asked if you would, in his Dad’s memory, Like and Share this page. As you do that, tag 8 Facebook friends to go to Mass over the next 8 Sundays and, at that Mass, light a candle for a loved one or, indeed, for Anthony, take a photo of that lit candle and post it to this page using #8masses4no8. By doing this you will be bringing additional comfort to this mighty young man and his family at this time.”

The first post on the site was from Tony’s mother, Olive, who confirmed it was her son’s idea and that he thought it up on Saturday night last, after returning from Thomond Park. “Tony was inspired by what he had experienced in Thomond Park and came up with the idea of getting people to go to Mass to pray for deceased family or friends, including his father, in the run up to Christmas. The eight week cycle is fitting as his father will, of course, forever be associated with the number 8,” Olive said.