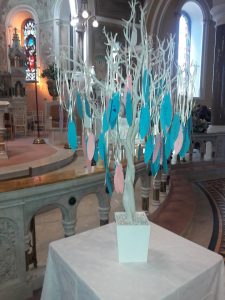 Tree of Remembrance – a feather for each person lost in a farm accident.

Bishop Denis Nulty has encouraged members of the farming community to “notice the signs” and be alert to farm safety and to climate change.

Speaking at the annual Farm Embrace Ecumenical Remembrance Service for all those lost their lives in farm accidents in Ireland, the Bishop touched on the subject of climate change.

He said his own late father, who was a farmer, could read the “signs that nature so beautifully presents” such as the swallow’s arrival, and the hawthorn in bloom indicating what kind of winter lay ahead.

“Those who work on farms are good at reading the signs that nature offers,” he said.

Dr Nulty noted that while today’s generation of younger farmers have apps on smartphones ranging from ‘Beef Pricewatch’ to ‘MooMonitor’ to predict calving times, and to forecast weather, they can be fail to look around and see the “signs of the times”.

“I am always intrigued no one ever blames climate change for the current heatwave we are enjoying!” he said.

Speaking on the topic of the day, he said newspaper headlines reporting the rise in accidents on farms do not always adequately or sensitively address the “huge grief and loss” that the death of someone causes.

“The numbers dying are still too great; the occasions of death are still too familiar; the column inches in newsprint, national and provincial, are still too frequent. Of course, one death, is one too many for the heartbroken family left behind,” he said. 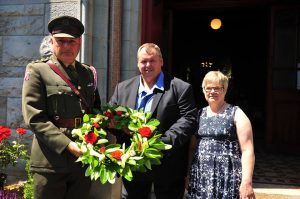 An Taoiseach’s ADC Captain Scallon presented a wreath to Padraig & Joan Higgins, who lost their little boy James 10 years ago.

The Bishop of Kildare & Leighlin highlighted how the farm as a place of work carries huge hazards: the slurry pit, pto drive, and draw-bar on machinery, trailers loaded with bales of hay or straw, and temperamental bulls or cows.

Statistics show that 30% of total fatalities in the period 2008-2017 were due to tractors and farm vehicles, and 20% were due to contact with machinery.

He cautioned parents to be especially sensitive and clued in when their children are on the farm. He noted that older people are also more vulnerable to the dangers.

Bishop Nulty said that when Pope Francis arrives for the World Meeting of Families in August, he will speak of the importance of family life, and remember absent family members.

“Too many families gathered in Abbeyleix this afternoon miss loved ones from around their supper table because of a tragic event in the past,” he said.

Embrace FARM was founded by Brian and Norma Rohan, following the death of Brian’s father in a farm accident.

The charity hosts the annual ecumenical remembrance service to commemorate those who have lost their lives or have been badly injured in farming accidents.

The service was held at the Church of the Most Holy Rosary, Abbeyleix, Co Laois on 24 June. Bishop Nulty and Church of Ireland’s Canon Harvey were among clergy present.