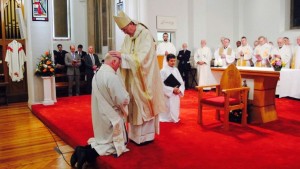 The renewal of the Irish Church will be strengthened by the determination of men who see priesthood as a second life choice and respond generously, Bishop Denis Nulty has said.

In his homily at the ordination of Fr Shane Daly as a Jesuit priest on Sunday, the Bishop of Kildare & Leighlin said, “Today’s culture needs the conviction and life experience of these second vocations” and he added that such vocations would also be bolstered and supported by a loving family alongside great colleagues and friends from their former workplaces.

The ceremony took place in Belvedere College where Fr Shane has been working since last September.

Bishop Nulty described a vocation as not just a call, but also a response. He noted that this was the first Jesuit ordination in Ireland since 2009 and that Fr Shane was from the Diocese of Kildare & Leighlin.

Of the vocations picture for the Jesuits and more generally in the Irish Church he observed, “While there are a few in formation, like the diocesan landscape, the religious landscape will look very different in the coming years. In recent years there has been a notable increase in the average age when a seminarian might commence formation.”

He referred to the 2013 study ‘The Lure of the Seminary’ which was commissioned by the Council for Research and Development at Maynooth and explored the typical routes seminarians took before entering seminary.

A similar study in 1980, the year before Bishop Nulty entered the seminary, discovered that 59% of the first year seminarians were then between 17-19 years of age.

“I was among that group. The picture is different now; 71% of the same first year pool are over the age of 25.”

Of priesthood, Dr Nulty said that for a priest there can be no short-changing when it comes to living a life of integrity and authenticity.

“We have seen the scars that still remain from priests and religious who simply were not authentic and absolutely didn’t live a life of integrity. The Church needs men to step up to the mark and answer God’s call.”

Referring to the location of the ordination ceremony in Belvedere College, the Bishop noted that the day before the ordination he had celebrated the 35th anniversary of Belvedere alumnus, Frank Duff.

“I suggested that Duff might be a model of robust and at times critical lay leadership in the Church. The Church needs courageous lay women and men who take seriously their baptismal calling to follow Christ. Even if our seminaries were overflowing with vocations, the particular contribution of lay people imbued with the spirit of Frank Duff, Edel Quinn and Alfie Lambe to mention but a few, and actively immersed in every detail of church life, is an essential element in witnessing to Gospel values in today’s society. It is not an optional extra!”

“We live, aware of our brokenness and weakness, our inadequacies and insecurities and we place them all in the hands of our Lord,” he said.

“We can’t be Pontius Pilate types who change our colours or spots depending on whose company we are in. What we say with our lips is connected to our hearts. This is what living our baptismal calling means. This is what being a priest means today. This is what it means to be authentic, to be a person of integrity,” Bishop Nulty said.

He spent four years as a seminarian in Maynooth but discerned that diocesan priesthood was not for him.

He later did his novitiate in Birmingham, teaching in the Jesuit Coláiste Iognáid in Galway, and spent time in Loyola Hall in Liverpool, before spending the past four years in Toronto.

He is the first priest to be ordained in Belvedere’s 183-year history.

On Tuesday, Fr Shane celebrated his first mass for the Cherryfield Community of retired Jesuits. He was accompanied by Deacon Albert, another Jesuit, from Belgium, who is to be ordained next year.