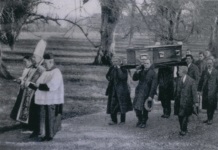 Bishop Denis Nulty has cautioned that there should be no rush to conclusions on empty seats at the final Papal Mass this time last year. As he opened an exhibition featuring Blessed John Sullivan in the People’s Church, Clongowes Wood College, Clane, Co. Kildare, Bishop Nulty said:

“The days that followed led to an intense media debate about how many people actually attended the Mass. Photographs were shown of rows and blocks of empty seats, and yet the same photographs were most likely taken some time before the Mass commenced; even the choir weren’t then in situ.”

He added that back in 1979 his mother, who was a daily Mass goer during her life, did not attend any of the Papal ceremonies either.

“We should therefore be slow to come to rash conclusions around empty seats,” he said.

If John Sullivan were alive he probably would not have been in the congregation in the Phoenix Park either, as he would have offered to do cover duty in Clongowes such as going on a call with a sick child; meeting a mother who needed prayers in Rathcoffey; seeing a family in need in Donadea; and making a house call to Dunboyne. “John Sullivan didn’t do pomp and ceremony; he is, after all, a People’s Saint,” said the Bishop.

It was fitting to hold the event in the People’s Church, as it is less ornate than the Boys’ Chapel. Blessed John also celebrated Mass, heard Confession and met the ordinary folk from the locality in that same church.

“It is only proper then during this National Heritage Week an exhibition should be hosted here in the People’s Church celebrating Blessed John. It is, after all, the people of Clane, Rathcoffey, Cooleragh, Donadea, Dunboyne, Maynooth, Kilcloon, Naas – you are the locals who have helped John Sullivan,” said Bishop Nulty.

John Sullivan grew up in Dublin, was reared in the Anglican tradition, and attended the Portora Royal School in Enniskillen and later Trinity College. He served his time on the English law circuit before converting to Catholicism and allowing that conversion to touch the hearts of the poor and needy.

Blessed John Sullivan spent 21 years of his priestly life in Clongowes teaching the boys. He was their spiritual director/spiritual advisor, as he was to many of the sick and forgotten in the local area. When he died in 1933, his remains were interred in Clongowes for a further 27 years, before the process of exhumation commenced.

There is an exhumation account in Seamus and Cáit Cullen’s exhibition, which also includes items associated with every aspect of Blessed John’s life – photographs, books, articles, newspaper cuttings. Bishop Nulty said there may be more such items in attics in the locality that could help Blessed John on his road to being recognised as a Saint.

“What will help him even more is a proven miracle, a recent miracle since his beatification in 2017. We must earnestly keep our prayers going in this regard. Already he is a Saint at a local level; it is imperative that we do everything possible to have him proclaimed one soon at a universal level,” he said. 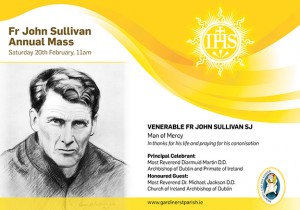 Bishop Nulty said he would dearly love to see John Sullivan’s body return to Clongowes for a brief ceremony in the coming years, perhaps when he is canonised.