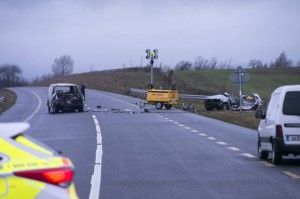 Bishop Denis Nulty of Kildare and Leighlin has expressed his deep shock over the deaths of the four young women in a fatal road traffic accident near Athy, Co Kildare on Tuesday evening.

In a statement on Wednesday, Dr Nulty asked the faithful of the diocese to pray for the deceased, the injured, the bereaved, friends, colleagues, the emergency services, and all those affected by this tragedy.

A 20-year-old woman who was driving the car the four young women were travelling in and two men who were in the van which the car collided with, are still in hospital.

The accident occurred at Birdstown in Co Kildare, three miles from the M9.

“It is a dark day for the people of Carlow, Rathcoole and Athy and there is very little any of us can say at this time to comfort those bereaved by this tragedy,” Bishop Nulty said.

He said he would “pray that the families will receive all the support they need at this time and that they will be given privacy to mourn their loved ones.”

Separately, St Leo’s College in Carlow issued a statement in response to the tragedy which involved five of the school’s past pupils.

The statement said the staff and students of St Leo’s College are “devastated at the loss of four beautiful young girls”.

It extended “heartfelt sympathies” to their families and friends at this awful time. “May their gentle souls rest in peace,” the statement said.

“We pray for their friend who was injured in last night’s crash and ask God to extend his healing grace to her. We also think of the driver and passenger in the van and ask God to be with them and their families.”

Fr Frank McEvoy from Moone parish in Co Kildare gave the four dead women the last rites on the roadside.

Speaking to Pat Kenny on Newstalk, he said he was called out by Gardaí. “To see four young bodies on the side of the road, it was very sad and very sobering.”

“It really brought it home. So many people are careful on the roads now but anything can happen,” he said.

“When you stand there and see four young bodies with their whole lives ahead of them,” Fr McEvoy said.