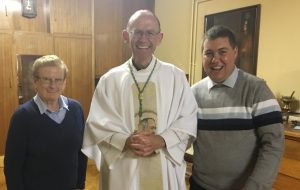 Bishop Fintan Monahan of Killaloe has highlighted the role played by the Legion of Mary in fostering vocations to the priesthood.

In his homily at a Mass for the annual Legion of Mary pilgrimage to Knock shrine, the Bishop said recent analysis of a survey of priests showed that over one third said they had first had experience of prayer and devotion and encouragement towards priesthood through the Legion of Mary.

His comments were made as the latest batch of seminarians begin their studies in Maynooth and other seminaries in Ireland and Rome.

According to the Catholic Communications Office, 19 new seminarians have begun their formation for Irish dioceses.

The 19 are studying in St Patrick’s College, Maynooth (6), the Pontifical Irish College, Rome (2), St Malachy’s, Belfast (1) and the Pontifical Beda College in Rome (2). Eight of the seminarians have begun a propaedeutic year in locations in Ireland and abroad.

It strongly recommends the introduction of a pre-seminary (propaedeutic) year for new candidates who wish to discern their priestly vocation.

That is why so many of this year’s cohort of diocesan seminarians are undertaking the propaedeutic programme.

There are over 800 undergraduate and postgraduate students registered at the Pontifical University at Maynooth for programmes in theology, philosophy and canon law.