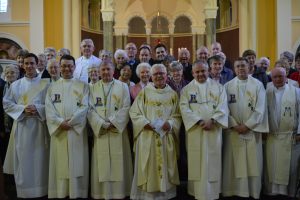 Bishop Michael Smith has paid tribute to the courage and witness to the faith of the many Irish Columban martyrs who died over the past one hundred years.

Speaking to CatholicIreland.net, Bishop Smith welcomed efforts by the Korean Catholic Church to promote the beatification of seven Irish priests of the Society of St Columban (popularly known as ‘the Columbans’) who are included in a list of 84 modern-day martyrs in Korea.

The Bishop of Meath was a concelebrant at a special Mass on Monday evening at the headquarters of the Columbans in Dalgan Park, Co Meath to mark the beginnings of the Maynooth Mission to China in October 1916.

“The seven included one of our own – Fr Paddy Reilly from Drumraney,” Dr Smith said. 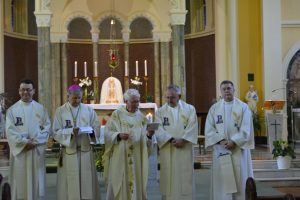 He recalled “Their courage, their commitment, their witness to faith and the way that they stayed in the places they were assigned to during the Korean War and then ended up in prison or on death marches.”

The seven priests were stationed along the border with North Korea at the outbreak of the Korean War (25 June–27 July 1953) and were killed during the early days of the Communist invasion.

The main celebrant for Monday’s Mass was Fr Neill Collins, Columban historian, who was joined by the president of Maynooth, Mgr Hugh Connolly and the acting president, Fr Francis Mullaney, as well as a representative of the archdiocese of Tuam and the Columban assistant regional director, Fr Padraig O’Donovan.

In his homily, Fr Collins recalled that on the evening of 9 October 1916, two priests, Edward Galvin and John Blowick, waited nervously in the rooms of one of the professors in St Patrick’s College, Maynooth for the decision of the Standing Committee of the Irish Bishops. 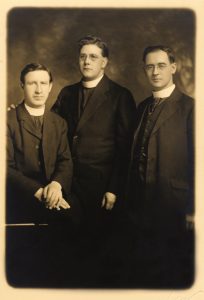 “It was just six months after the Easter Rising and the execution of its leaders. In France, the Battle of the Somme began on 1 July and was still raging – with more than a million casualties. The bishops had many serious matters to discuss. At half past three Blowick was summoned down to them. He was only 27, facing ten senior bishops. His proposal was the opening of a college to train Irish priests for China.”

Blowick was a Professor of Dogmatic and Moral Theology in Maynooth, and was haunted by the words of Our Lord, “Go, make disciples of all the nations”.

His companion, Galvin, was a missionary just home from China, practically unknown in Ireland.

He wanted an Irish mission to China, but he was terrified and confessed candidly “that the immensity of the task and the necessity of having to appear before a body of Irish bishops frightened me.”

Their proposal was approved by the full meeting of the bishops on the 10 October, and that approval was published in the newspapers on the 11 October.

It read: “The Bishops joyfully approve and bless the project and earnestly commend to the generous help and support of the faithful the establishment of this Mission House for the training of Irish missionaries for China, who, in a spirit worthy of our missionary race, offer their lives for the propagation of the Faith in a pagan country.” 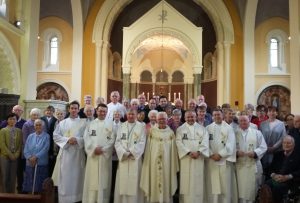 According to Fr Collins, Fr John Blowick regarded that document as the Magna Carta of the Maynooth Mission to China.

The mission house was leased at Dalgan Park, Shrule, Co Mayo and 19 students, mostly from Maynooth, arrived on 29 January 1918.

Two years later, on 17 March, there were departure ceremonies in Dalgan.

Speaking after the Mass, which was attended by Columban priests, sisters, lay missionaries and co-workers, Bishop Smith described the bishops’ decision in 1916 as “extraordinary”.

He said Bishop Galvin was “obviously a very persuasive man” with “a lot of personal skills”, because he had managed to convince the bishops to back the project even though it meant setting off for China in the middle of a world war and in the wake of the Rising.

In his homily, Fr Collins noted that Fr Blowick, the first editor of the Far East magazine, accompanied the first 16 priests to Hanyang in China. “They were going to preach the gospel, to millions of people who had absolutely no interest in their message.”

Following Mao Zedong’s declaration of the People’s Republic of China on 1 October 1949, foreign missionaries were expelled and Bishop Galvin was forced to leave on 17 September 1952.

However, the story of the church in Hanyang, the city the Columbans first went to in the 1920s, didn’t end with the expulsions.

Bishop Galvin left a Chinese priest, Peter Zhang, as his successor. After years in prison, Zhang was released. In 1986, in a railway station, he was ordained Bishop of Hanyang, and began to build again.

Ten days ago a new edition of the Guide to the Catholic Church in China was published online.

For Hanyang it lists seven priests, all ordained since 2001, six major seminarians, 20 sisters in the congregation founded by Galvin, and 30,000 faithful.