Bishop of Limerick speaks of the death of Dolores O’Riordan 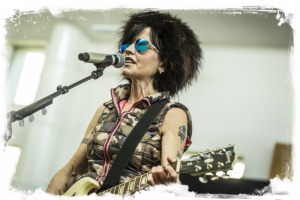 The passing of a loving mother, daughter and sister, and a sad loss of a young and precious life, is how Bishop of Limerick Brendan Leahy described the sudden death of rock star, Dolores O’Riordan.

“Millions across the world have been shocked by this sad news but first and foremost I think of her family. Way beyond anything else, this is the passing of a loving mother, daughter and sister. This is a family that will grieve deeply for Dolores in the same way as others who lose loved ones. It starts and ends with them,” he said in a statement.

She grew up in Ballybricken in the Archdiocese of Cashel and Emly, but Bishop Leahy said that Limerick city and all of Limerick, held her very dear in its heart.

“Of course she was a superstar and an inspiration to so many people, not least from Limerick,” he stated. “Her rise to stardom gave a huge amount of belief to young people locally at the time.  She was a true child of Limerick; talented, honest, full of soul and courageous.  And she never lost sight of who she was and where she was from.”

He highlighted that she often spoke about her spirituality and how important that was to her.

“She spoke of taking a lot of influence for her music from her spirituality. Limerick and the world has lost a kind, soft-hearted, talented soul. May she rest in peace,” he concluded his statement.

When she was born, her mother named her after the Lady of the Seven Dolours. She was raised as a Catholic. Laurel Hill Coláiste FCJ, the Catholic voluntary secondary school which she attended, stated that she had a love for music during her school years.

“The school community of Laurel Hill Colaiste FCJ would like to express its heartfelt sympathy to the family of Dolores O’Riordan,” the school authorities stated. “Dolores was always proud of her Limerick roots and we are very proud of her as a past pupil. She was a lover of music during her years here in school, a love which continued throughout her life. She had many friends here and maintained her link with the school after graduating, inviting the school choir to sing at her wedding some years later.” 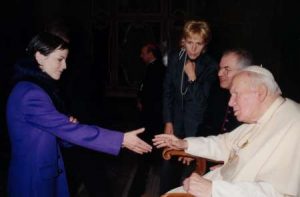 In 1994 she had her wedding in Holycross Abbey, Co Tipperary. In December 2001 she met and performed for Pope John Paul II. Her mother was present with her and very happy to meet the Pope. She sang four songs for the Pope including: Analyse; Panis Angelicus; Little Drummer Boy; and Silent Night.

A 67-piece orchestra accompanied all of the artists including Terence Trent D’Arby, Westlife and Russell Watson and many others. She performed again in the Vatican in 2002.

More recently in 2013, she performed in the Vatican’s annual Christmas concert at the invitation of Pope Francis.