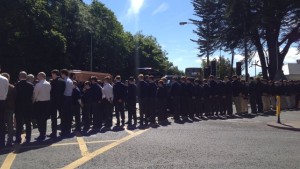 Funeral of Eoghan Culligan at the Church of the Annunciation Rathfarnham. Pic courtesy: www.rte.ie

Bishop Brendan Leahy of Limerick has said that while the grief for the families and friends of those who died in the Berkeley tragedy is “unspeakable”, the sense of solidarity across Ireland and beyond, and particularly from the young, is hopefully shining through for them in these darkest hours.

In his homily at the Limerick Diocesan Pilgrimage Mass at the Lourdes Grotto on Monday, Bishop Leahy said it has been a shattering week for the bereaved families but he hoped they could take comfort from the enormous outpouring of support in response to the terrible tragedy in California.

He said the coming together of the nation and particularly the response of the youth this past week had been a “triumph of human spirit”.

“I thought initially following this horrific accident, how would the families of these beautiful young people who died in the accident be carried through this unimaginable tragedy,” he revealed to over 370 Limerick pilgrims.

“I thought of how would they get through the storm? Would, as with yesterday’s Gospel when Jesus brought calm to a furious storm as waves crashed over his boat, they get calm themselves? I figured that they would ask the question where is God now. No doubt such questions exist for them.”

“I hope they can take comfort, and they have already indicated as much, in the triumph of immense human spirit that has been the response to this horrific, unimaginable accident.”

“Collectively our country has had a moment to stand together with them and strive to carry them through and the first to rise with them have been the young, the friends of the young people killed so tragically and, indeed, thousands of others from across the country who never knew them.

“As St Paul says, we belong to each other; the lives of each of us impacts on each other. Eimear, Niccolai, Lorcán, Olivia, Eoghan and Ashley have entered into the lives of countless people in Ireland, especially young people.”

“Just like our young here today, collectively the young of our country are walking shoulder to shoulder with the bereaved.”

“I hope and pray that those who have been so suddenly bereaved have felt something of God’s gentle touch in the support, sympathy and solidarity of a nation. I believe the expressions of solidarity on the part of young people especially has shown us God’s grace.”

“In the midst of unspeakable grief, of such darkness, light has shone through. God’s light.”

At 11am on Tuesday, the funeral Mass for Eoghan Culligan took place at the Church of the Annunciation in Rathfanham, Dublin.

The chief celebrant and preacher was Fr Richard Olin CSSp of St Mary’s College in Rathmines, where Eoghan attended school.

Eoghan’s mother Marie paid an emotional tribute to her young son, describing him as “the light of our lives which brightened up every day. We’ve lost a beacon which will never again shine. Our hearts are broken, however our love will remain intact until the day we die.”

A guard of honour stood outside the gates of the church before and after the funeral Mass formed by students from St Mary’s College and members of the Ballyboden GAA club, where Eoghan played football.

Separately, Eimear Walsh’s funeral took place at the Church of Our Lady of Perpetual Succour in Foxrock.

Fr Paul Ward, Parish Priest of Bayside, was the chief celebrant. He told mourners that the death of a young person is very difficult as it raises questions that cannot be answered, it challenges the very meaning and purpose of life.

The chief mourners were Eimear’s parents, Jim and Patricia, and her brother, Robert. Jim Walsh told the packed church that she was a “beautiful person”.

Minister for Arts, Heritage and the Gaeltacht Heather Humphreys attended the funeral Mass and the US embassy was represented by Stuart Dwyer, deputy chief of mission.

The funerals of Olivia Burke and Niccolai Schuster will take place in Foxrock and Rathgar tomorrow, while Lorcan Miller’s funeral will take place on Thursday at Rathmichael Parish Church in Shankill.