Bishop Leahy would like to see Limerick develop its own Camino 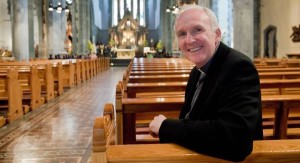 Bishop Brendan Leahy has said he would like to see Limerick develop its own Camino Trail which would incorporate an “incredible collection of religious sites” within the vicinity of the city and the wider county.

In an interview published on the Limerick diocesan website, Dr Leahy said one amenity he believes his adopted city needs is a walk that would take in religious sites from Kilmallock to Askeaton, Killeedy, Adare and Limerick city itself.

“You could put all of them into a necklace and create something very special for Limerick [and] for people to come and get some peace and calm along the way,” he suggested.

The Camino would tap into the increased popularity of such trails within Ireland and in places like Spain, France and Italy.

The Bishop of Limerick said another amenity the city lacks is an open house for drug addicts for the daytime.

“There’s a place for addicts at night but nowhere during the day and we have to face up to this reality,” he said and added that he would also like to see “more public amenities for families to enjoy together”.

Asked what he felt was the biggest challenge facing Limerick city and county today, the Bishop responded, “Housing is the big issue everywhere.”

He said Limerick is at “a great turning point that will involve many important choices” and the biggest challenge is to “really work together to let Limerick realise its potential”.

In response to a question about what gives Limerick its unique identity, Bishop Leahy replied, “It’s a Treaty City. It has the potential to bring the past, present and future into a dialogue. And to do that in so many areas – from sports to culture, from education to business, etc.”

He told his interviewer that he felt that Limerick “is completely undervalued from a tourism perspective” as there are so many lovely areas, from the Ballyhoura region, to Adare, the estuary, the Shannon and the stunning Clare Glens.

“One of my favourite places would, for sure be, Killeedy, which is associated with St Ita, the patron saint of the area. The Mass Rock there is a special place and it is a lovely part of Limerick, certainly very special to me.”

Asked about the importance of sport to Limerick, Dublin-born Dr Leahy replied, “Major.”

“So many people in Limerick have been formed in all kinds of ways through sport – from building up team skills to keeping hope alive even when there are setbacks, from discipline and focus to camaraderie among supporters.”

He also described the people of Limerick as “Realists with a sense of humour.”